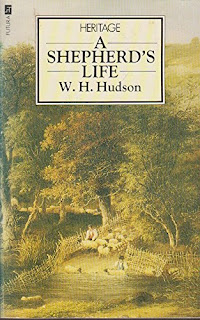 Many people have recently re-read W.H. Hudson's book A Shepherd's Life because it is mentioned early on in James Rebanks' more recent account of shepherding life. In that book Rebanks notes his pleasure at discovering Hudson's book because he wrote about people like him. I also saw this, but my interest had already been piqued by mention of Hudson's book in Eric Hobsbawm and George Rudé's class work of history Captain Swing.

Hudson's book is fascinating partly because it combines many literary forms. It is very much a celebration of the landscape, people and animals of Wiltshire where the author spends much of his time. Several chapters are detailed accounts of the landscape itself, a living, breathing space which Hudson wishes more people could experience. In fact he argues that children waste time in schools when far better lessons would be learnt if they could explore the countryside.

The book is also historic. Hudson, writing in the first years of the 20th century is also describing a changing rural landscape. One of the first anecdotes he has is of a boy, working in a field scaring birds, running to see Hudson cycle past. Hudson stops, thinking something is amiss, but the boy simply wanted to watch him go past - bicycles presumably still being a novelty.

Much of these experiences are told through the conversations that Hudson has over many years with Caleb Bawcomb, a man who worked for fifty years as a shepherd. Caleb learnt his craft from his father Isaac, and Hudson tells many stories relating to both their lives - from the art of shepherding, to that of training a dog or the reality of poaching in the villages. The latter carries a strong sense of class struggle about it, as the villagers frequently united to both poach and protect those who stole. But what interested Hobsbawm and Rudé was Hudson's mention of the Swing riots and the treatment of those who took part. Hudson writes:


The incident of the unhappy young man who was transported to Australia or Tasmania, which came out in the shepherd's history of the Ellerby family, put it in my mind to look up some of the very aged people of the downland villages, whose memories could go back to the events of eighty years ago. I found a few, "still lingering here," who were able to recall that miserable and memorable year of 1830 and had witnessed the doings of the "mobs." One was a woman, my old friend of Fonthill Bishop, now aged ninety-four, who was in her teens when the poor labourers, "a thousand strong," some say, armed with cudgels, hammers, and axes, visited her village and broke up the thrashing machines they found there.

Some more of the old dame's recollections will be given... showing what the condition of the people was in this district about the year 1830, when the poor farm-labourers were driven by hunger and misery to revolt against their masters—the farmers who were everywhere breaking up the downs with the plough to sow more and still more corn, who were growing very fat and paying higher and higher rents to their fat landlords, while the wretched men that drove the plough had hardly enough to satisfy their hunger.


Hobsbawm and Rudé particularly note the story of a curse on the Ellerby's of Doveton. Ellerby, the father of Caleb's employer had, according to tradition, allowed a innocent man be transported for his involvement in the Swing movement. From Australia, a letter, containing a fragment of a bible verse was supposed to have cursed the family to be childless from then onwards. The story is of interest, mostly because it was remembered so long after the events, part of a folk tradition that kept alive the injustices of the past.

One thing that modern readers might be amused by is Hudson's account of the decline of birdlife in the countryside, and the way that the military use of Salisbury Plain was destroying life, landscape and farming. Though in the case of bird decline the cause is somewhat different to today's ecological crisis:


Wiltshire, like other places in England, has long been deprived of its most interesting birds—the species that were best worth preserving. Its great bustard, once our greatest bird—even greater than the golden and sea eagles and the "giant crane" with its "trumpet sound" once heard in the land—is now but a memory. Or a place name: Bustard Inn, no longer an inn, is well known to the many thousands who now go to the mimic wars on Salisbury Plain... The stone curlew, our little bustard with the long wings, big, yellow eyes, and wild voice, still frequents the uncultivated downs, unhappily in diminishing numbers. For the private collector's desire to possess British-taken birds' eggs does not diminish; I doubt if more than one clutch in ten escapes the searching eyes of the poor shepherds and labourers who are hired to supply the cabinets.

Well written, the book was amazingly popular and helped to inspire some of the earliest social movements around protection of the countryside and the back to the land movement. I didn't particularly think that Hudson romanticised the countryside - there's plenty of poverty, low pay and hunger here. Though because he fictionalised some of the accounts and changed of people and locations the reader should be wary of taking things too literally. Nonetheless, as other books have pointed out, it is possible today to visit the places that Hudson writes about and corroborate much of the story.

Horn - The Rural World - Social Change in the English Countryside 1780 - 1850
Rebanks - The Shepherd's Life: A Tale of the Lake District
Hobsbawm and Rudé - Captain Swing
Posted by Resolute Reader at 9:21 pm