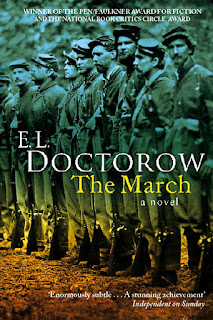 An ambitious and unusual novel, The March is set during General Sherman's march across the southern states of America towards the end of the Civil War. His massive army is followed by huge numbers of freed slaves, many of whom have nowhere else to go, and others follow because they see the Army as their liberators. A key scene, and turning point for several of the characters is the moment the slaves are offered land to farm as their own by the liberating forces.

Living off the land, Sherman's troops destroy the areas they pass through. Crops are burnt in the fields, plantation homes destroyed and slaves liberated. This is war, but war with a cruel vengeance particularly displayed during the burning of Atlanta. Before the war can end Sherman has to destroy the last Confederate forces - so at the heart of the novel are some key, set-piece, battle scenes.

The story of The March is told through the eyes of some key individuals giving differing viewpoints - Pearl, the daughter of a white slave master and her black slave mother, grows up quickly in the midst of war. Disguised as a drummer boy she joins Sherman's army for safety but grows close to Emily Thompson, the daughter of southern landowning aristocracy, who has become the lover of Doctor Sartorius a brilliant surgeon looking after those injured in the battles. Comic relief is offered by two Confederate troops who switch sides on multiple occasions, one of whom is driven mad by the death of the other.

The brilliance of the novel is that it makes the march the main character of the book, described through the experiences of the various individuals we follow. The Union troops aren't heroes, in fact several of the leading military commanders are extremely unsavoury and characters have to be careful to avoid rape and murder. While the different viewpoints allow Doctorow to let us see everything, the twist that allows one character to be at Lincoln's deathbed seemed awfully contrived.

While it's not an easy book to read, it does give a sense of the brutality and chaos of the Civil War and the liberation that followed in the path of the armies. It doesn't attempt to show what happens next, but the hope of those liberated is a fitting finale - though overshadowing it all has to be the reader's knowledge that the legacy of slavery remains with us today.
Posted by Resolute Reader at 7:27 pm