James Rebanks - The Shepherd's Life: A Tale of the Lake District 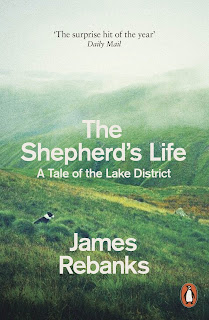 James Rebanks' book is a remarkable study of agricultural life in the Lake District in the North West of England. This is no romantic view of a countryside that is idyllic and constantly summer. Rather this is a warts and all account, that emphasises the hard work, the financial hardships (individual poverty) and the struggle to keep going. I've always through that workers describing their own work are often far more eloquent than they are given credit for, and this is no exception. Its a beautifully written book and the author is not afraid of showing his own limitations, together with his successes. Most of all however, this book challenges those who see the countryside as a place to escape the towns and cities that is unchanged from a distant past. Instead Rebanks shows how the countryside has been transformed, shaped and managed by generation after generation of farming communities.

One of the themes that I've tried to draw out in my own writings on the countryside is precisely this sense of the landscape as resulting out of millenia of human labour, and indeed class struggle. Rebanks himself speculates comments sheep farming in the region would have had many similarities to contemporary Lake District farming.

But another aspect to farming that I've always been struck by is its inherently collective nature. Rebank's book begins with a description of the gathering of sheep from the fells. It requires coordination on many levels - the organisation of the different farmers who come together to bring the animals off the unfenced common land; co-ordination between shepherd and dog and finally co-ordination with nearby communities when sheep become mixed together. This account of sheep gathering on "the greatest concentration of common land in Western Europe" left me near breathless in its description of the joint work of Shepherd and sheepdog. But I was also taken aback by the sense of a community collectively working - an individual shepherd simply couldn't survive here.

This community stretches back into time and Rebanks is very aware of his own position. He writes, rather movingly:


There is a thrill in the timelessness up there... I have always liked the feeling of carrying on something bigger than me, something that stretches back through other hands and other eyes into the depths of time... I am only one of the current grazers on our fell (and one of the smaller and more recently established ones at that), a small link in a very long chain. Perhaps, in a hundred years' time, no one will care that I owned the sheep that grazed part of these mountains. They won't know my name. But that doesn't matter. if they stand on that fell and do the stings we do, they will owe me a tiny unspoken debt for once keeping part of it going, just as I owe all those that came before a debt for getting it this far.


Rebanks highlights the continuity with the past that shapes the hillsides he works and continues to make and remark the artificial landscape, but on a smaller scale he shows through his relationships with his grandfather, father and children a different continuity here. These personal sections are part and parcel of Rebanks' relationship with the land, the community and the farm and they are difficult to read in places, as all honest accounts of family are, but they also tell the tale of how farming communities and farmers have survived and struggled over the centuries. The same communities meet at the same fairs as their ancestors did centuries before. Old men can remember the genetic origins of sheep going back decades, and their knowledge is crucial to 21st century farming.

There is continuity, but there is also change. Rebanks herds sheep with 4x4 vehicles and waterproof clothing that must have transformed the experience of shepherding in the depths of winter. But shepherding still has to be done in the winter, and no technology has yet been invented that can protect a sheep and its lamb in all situations - there will always have to be men and women who go out to find lost herds and rescue newborn animals.

James Rebanks begins his book with his frustrations at those who don't understand the Lake District like he and his family do. Those tourists and poets who simply see beauty or relaxation. By the end of it he understands their point of view too, but wants to make them understand what the Lake District and agricultural communities are - living, developing and growing parts of society that play a crucial role in our economy and have deep historical roots. I am glad that his book has become a surprise bestseller, because it will contribute enormously to an understanding of British farming that can only bear fruit for the future.

Related ReviewsArch - From Ploughtail to Parliament
Clutterbuck - Bittersweet Brexit: The Future of Food, Farming, Land and Labour
Howkins - The Death of Rural England
Hasback - A History of the English Agricultural Labourer
Whitlock - Peasant's Heritage
Posted by Resolute Reader at 6:31 pm