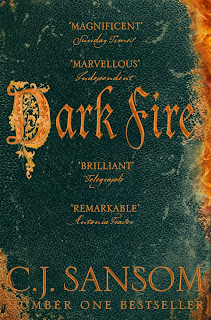 The second volume of CJ Sansom's Matthew Shardlake series begins with an unusual request to look into a case involving the alleged murder of a boy by his cousin. Shardlake resents the intrusion - in the aftermath of the events of the previous book he thinks he is out of favour with his former employer, Thomas Cromwell, and is trying to keep a low profile by earning his keep working as a jobbing lawyer. But 1540 sees Cromwell's seemingly unassailable position becoming threatened and so, Shardlake is drawn into a parallel quest - a mission to find a source of Dark Fire that has been discovered during the dissolution of a monastry. This Dark Fire is an ancient weapon that will simultaneously strengthen Henry VIII's forces in the face of threat from Catholic powers and save Cromwell's position (and probably life).

It's a much tighter mystery novel that the previous book and it uses the tension of the years of Reformation well. We get a real sense of anguish and fear among the mass of the population - as old certainties change and the future is unclear. Gossip in the streets and pubs centres on rumours that the King will marry again and what this will mean for religion. But saying the wrong thing can still lead directly to prison, torture and execution and this, together with court intrigue, means the investigations continue in an atmosphere of extreme tension. CJ Sansom uses this well - the novel is long, but constantly intense - the reader is pulled along by events as, it must be said, is Shardlake who is frequently at a loss with what to do. Cromwell's servant and Shardlake's new sidekick - Barak - is a welcome foil to his new employers plodding honesty. The two go together well, and as they blunder towards a solution to a murder, they find themselves at the heart of a remarkable dangerous moment in the Reformation - publicly associated with the least popular person in the Kingdom. It's a great whodunit, even if you do know what happens to Cromwell.

Posted by Resolute Reader at 6:43 pm