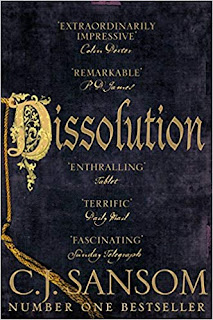 When C.J. Sansom's most recent book Tombland was announced I was inundated with recommendations from fans of his Shardlake series as it focuses on the Kett rebellions of 1549. Never having read any of this author I decided to begin at the beginning, and find out what the fuss was about.

Dissolution is the first in the series. It is set during a brief lull (following the Northern Rebellions) in the dissolution of the monasteries that has begun as part of Henry VIII's Reformation. Shardlake is an investigator sent to the monastery at Scarnsea on the South Coast, to look into the murder of one of Thomas Cromwell's agents. The agent has been looking into the monastery, in part it seems, to find evidence that could allow Cromwell to shut it down and confiscate its land and wealth.

Shardlake is caught up in a complex plot, a series of murders and violent attacks that lead him to suspect a number of the monks in turn. Because the monastery is isolated and cut off from the local population, the mystery has the feel of a locked room detective. The mystery itself is enjoyable and keeps the reader guessing right until the end - and cleverly Sansom manages to tie the solution into the wider changes taking place in English society. The threat from Cromwell and Henry hangs heavy over the monastery's inhabitants who worry about their futures and attempt to ingratiate themselves with the regime.

It's this aspect to the story that really made this into a page turner for me. Sansom describes the historical context brilliantly and the detail of life in a monastery and London in the 1530s is superb. It would have been much easier for the author to write a murder story randomly set in the 16th century. Much harder is to tie this into the political and social context and then make these links part of the fabric of the tale, indeed he also tackles subjects like sexuality, disability and gender in subtle and clever ways. To say more would spoil it for future readers, but I look forward to reading the other Shardlake books before reaching Tombland.

Duffy - The Stripping of the Altars
MacCulloch - Reformation
Wood - The 1549 Rebellions and the Making of Early Modern England
Hoyle - The Pilgrimage of Grace
Posted by Resolute Reader at 7:56 pm