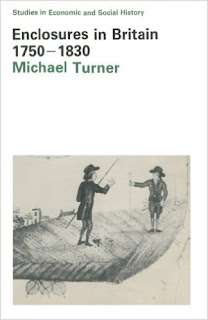 In Capital Karl Marx denounced the enclosure of common lands as a crime: "The parliamentary form of the robbery is that of Acts for enclosures of Commons, in other words, decrees by which the landlords grant themselves the people’s land as private property, decrees of expropriation of the people."

This robbery, the destruction of common lands in the interest of landlords, laid the basis for the capitalist economic system. Marx continued:

For many historians of the left, such as the Hammonds and EP Thompson, this sort of analysis became the natural approach to the question of enclosure. Yet there have been a series of revisionist attempts, starting the 1940s to challenge these conclusions. This short book then, is a useful over-view of both the history of enclosure and the historiography of the subject.

Enclosure itself varied dramatically over time and geographically across the British Isles. There were two particular peaks - before 1780 and during the wars with France after the Revolution. But there was also variation in which areas were enclosed, related to the soil and the potential land use. These changes themselves had links to changing diets, the growth of urban, industrial areas and so on.

Turner argues that enclosure was a much more complex process than often understood, one that had the intention of improving agriculture and profits, but should not necessarily be understood as a deliberate attempt to capitalise agriculture. That said, at least some 19th century commentators saw things in this vein. Turner quotes the President of the Board of Agriculture, Sir John Sinclair, in 1803, "Let us not be satisfied with the liberation of Egypt, or the subjugation of Malta, but let us subdue Finchley Common; let us conquer Hounslow Heath, let us compel Epping Forest to submit to the yoke of improvement".

After 1700 Turner concludes that "enclosure by agreement" was limited, "Parliamentary enclosure" becoming the most important (if not the most dominant) form of enclosure. In studying why, Turner overturns some cherished ideals. For instance he argues that the costs of enclosure where much higher than has previously been acknowledged though these costs were disproportionately higher for smaller and poorer landowners.

The understanding that costs of enclosure were higher have led, Turner argues, to a new recognition of the "social repercussions of enclosure".


In general... it looks as though there was a considerable turnover in landowning personnel. Even if there was not a decrease in the numbers of landowners, and in particular in the numbers of the smaller owner-occupiers, the epitome of the independent peasant class, nevertheless many of these owners sold up at or shortly after enclosure. They were replaced by... people from their own agricultural and social class... Small owners also had difficulty in meeting enclosure expenses and often sold up at enclosure.

Turner concludes then, that this


brings into fresh focus the appearance of a landless labour force to fuel the fire of industrialisation, especially if enclosure improved labour productivity rather than extended labour opportunities. ... Notwithstanding the demographic revolution which was in train and creating more hands than could be gainfully employed in an improved agricultural industry, enclosure is again under scrutiny as a possible contributor to the industrial labour force.

Turner's short but wide-ranging book then points out the limitations of an earlier generation of enclosure historians, but through an examination of more contemporary studies, finds that their conclusions about the consequences of enclosure and the political/economic situation that drove enclosure, were generally correct.

This short book was published in 1984 so there have been many studies and books that have looked at this since, but this will provide a useful basis for understanding that work and the debates that have taken place on the subject. [1]

[1] A very recent examination of this subject and of Michael Turners' book is Michael Zmolek's Rethinking the Industrial Revolution p272-274, though Zmolek incorrectly cites Turners' work as being published in 1968.