Peter Marshall - Heretics & Believers: A History of the English Reformation 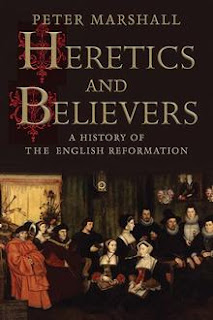 The English Reformation is a daunting subject for the reader. There are countless contemporary books about the period, not least those the huge number that deal with the life and loves of King Henry VIII. The debates that took place during these years of social and religious change were complex and all encompassing. They were also perhaps the first major social changes to be thrashed out on paper in front of a mass audience that was, as Peter Marshall notes, experiencing a "slow but steady rise in literacy". Printing, Marshall points out "reflected and invigorated lay piety" and despite high-levels of illiteracy, he argues that in the early "sixteenth century, perhaps a third to a half of male Londoners were able to read". Thus the Reformation saw a correspondingly growth in material (religious and non-religious) that today informs historians and histories.

This vast quantity of sources means that any decent history of the Reformation is going to be long, even if the author has done their best to pare down the material. Peter Marshall's new history Heretics & Believers is a massive work. It is based on a scrupulous study of contemporary material, which informs the work, but doesn't over-whelm it. Marshall's book is not over-written, and on occasion, despite its length I sometimes felt I needed more than the few sentences devoted to a particular person or incident.

For Marshall, the Reformation is essential a period when religious change took place on the basis of a rejection of existing ideas and practices. Writing about Thomas More he says that he, "exemplifies the contradictory impulses felt by many thoughtful and spiritual persons in early Tudor England. They longed for reformation of Church and people. But there was a little clarity about who could lead that reform to fruition." Thus there was a "longing" for change that Marshall sees as coming inside the Church itself. As he explains in a key paragraph:


Resentment at the Church's jurisdictional powers, a dislike of overweening or immoral priests, exposure to the levelling wisdom of Lollardy - all these played their part in preparing people to welcome the winds of doctrinal change. But they were not the real wellsprings of the Reformation movement. It arose from deep within the devotional core of late medieval Christianity, a paradoxical tribute to the Church's success in cultivating among priests and people alike a serious concern with salvation, and in fostering a personal relationship with Christ.

This is not to say that Marshall neglects the way that ordinary people understood, debated, interpreted and argued over religion. In fact one of the lovely things about this book is that he celebrates this participation, and some of the most fascinating bits are those that explore the way that people experienced and, on occasion, drove the reformation forward (or indeed tried to hold it back).

But what Marshall lacks is an clarity in trying to explain what triggered the "wellsprings" of the Reformation. Why drove some among the "devotional core" to begin to question and demand change?

Interestingly on the page after the one where I've taken the above quote from, there is a hint at what I think is the real cause. Marshall writes:


One important resource, a true birthplace of the English Reformation, was... Antwerp...a hundred miles from the furthest tip of Kent. Antwerp was the 'staple' or designated port of business, of the Company of Merchant Adventurers, who enjoyed a monopoly of the export of cloth, mainstay of the late medieval English economy. Perhaps a hundred English merchants resided permanently in the city, but the transient population was much higher. Overwhelmingly the Merchant Adventurers were Londoners... Antwerp was also a centre of book production, the international lustre and technical capacity of its printing houses outclassing anything to be found in London.

So for Marshall, the close links with Antwerp and the importance and power of its printing and publishing trade were key. But he quickly moves on from Antwerp's role as a centre of merchant power, a crucible of capitalism. For me the roots of the Reformation lie in most part with a changing world. The decline of the old feudal order and the beginnings of a new society. Marshall himself understands this to some degree - in the early pages of the book he argues that "Catholicism was a better 'fit' for the traditional agricultural communities of late medieval England than for its developing urban centres". But for most of the book he sees the Reformation as essential a battle of ideas.

In some ways this doesn't matter. After all the Reformation was experienced by the majority of the population as a series of confusing changes to religious and secular practice. Old, traditional customs and traditions were gradually (or not so gradually) changed and replaced with new ways of doing things, new books and new languages. These changes were expressed as ideas about how to worship. No one turned up and said "hey capitalism is coming, you've got to change your religion". But in other ways it does matter. Religious practice was intimately tied up with everyday economic life. Thus when Marshall discusses the great rebellions of 1536 and 1537 the Lincolnshire Rising and the Pilgrimage of Grace, they are, for him, simply rebellions about religion. Yet they were also about mass rejection of the way that the Reformation was forcing change upon economic life. Religion was not a separate realm to everything else. They were inseparable.

While I disagree with Marshall's framework, I cannot help but celebrate his book. In its wealth of detail and breadth of coverage it is a definitive account of what took place during the Reformation. From the early religious arguments before Henry VIII's reign to the years of confusion that marked his rule, to the near Civil War that takes place afterwards, Peter Marshall manages to keep the narrative rooted in historical records. He never looses sight of the human aspect to the period - and whether its the execution of Thomas Cromwell, or the burning of some unfortunate heretic - Marshall puts each story into its wider context. It should also be noted that Heretics and Believers is an excellent read with smatterings of humour - quarrels between King and Pope, Marshall jokes, were to be expected "like rain on a Scottish holiday". So despite my reservations about the authors' framework for understanding the period, I have no hestitation in recommending that those interested in the period read it. Few books have the material and fewer still keep the reader engaged for 600+ pages.

Duffy - The Stripping of the Altars
Duffy - Voices of Morebath
MacCulloch - Reformation: Europe's House Divided 1490-1700
Paul - Thomas More
Wilson - The People and the Book
Engels - The Peasant War in Germany
Posted by Resolute Reader at 11:08 pm