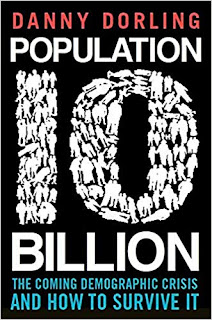 Far too many books on population are filled with fearful predictions about what will happen if the world's population continues to grow. So it is refreshing to read Danny Dorling's much more sober study that argues for a more nuanced discussion of the subject. It is also entertaining, something that can rarely be said about demographic studies. Dorling sets his case out early on. In the opening introductory chapter titled "Stop Worrying" he argues that he problem is not over-population, or population growth, but a world that prevents people having what they need. Talking of 2011/2012 when population was predicted to reach 9.1 billion by 2100 he writes:


The main reason for the scare stories of 2011 and 2012 was that some demographers had been influenced by those with other agendas, people who were becoming interested in demography because they believed there were too many people already. Projections that indicate a 'soft landing' of human population growth do not help the agenda of those who want to cry wolf. As the world economy faltered in 2008, there were groups that wanted to put the blame for the fact there would be too little to go round in future on there being too many people, rather than not enough sharing.

As I've noted in other recent reviews on books about demography, there is a close association between the growth of global capitalism and population expansion. Dorling shows 1851 as the start of the "population explosion" but he argues that 1971 (ironically the year when Paul Ehrlich's book The Population Bomb was first published in the UK) as being the point when population when "global population acceleration... ended". In keeping with the "Stop Worrying" theme, Dorling argues:


The latest UN projections suggest that in the 14 years following 2011, we will increase in number from seven to eight billion humans. What king of world can we expect to live in by 2025?... Look at the graphs in this book of where population growth is forecast to occur - almost all the extra people are to be born where pollution by humans is least. And notice the deceleration. It is going to take longer, another 14 years, to add this extra billion as compared to the billion that came before. This is the first time we have ever seen an increase in the number of years it has taken to hit the next billion.

Dorling puts an firm case against those who argue that population growth is the problem and that we need to take drastic action to lower population. Instead, Dorling argues, the problem is inequality in wealth distribution: "There is suddenly a very obvious solution to a rich world plagued with greed and obesity and a poor world suffering oppression and starvation, a solution that is only possible because we are not going to have additional billions to be fed decade after decade.

He also argues that population growth will decline quicker if we "tackle gross economic inequalities". He also skewers those on the right who rail against immigration and migration. Rather than this being a problem, it is enormously  important for ageing populations in the developed world, and, he notes, encourages global population to decline because immigrants to rich countries have smaller families.

This facts are important because they contradict those on the right who argue population is inevitably growing to the detriment of the plant. It also gives anti-racists further arguments to defend migrants, immigrants and asylum seekers. But I'm not sure it's the best way to approach the debate because it gives some ground to the idea that population is an issue. Here, in my criticism I should reiterate how much I agree with 99 percent of Dorling's book. He says, for instance, "Children are not a cost to the planet". This is a fundamental point, those who argue that population is a problem forget that each life matters to our world, their friends and family etc. They are part of a solution, not a problem.

But I think what Dorling fails to do is really show how the problem is the capitalist economy which is driving environmental destruction and producing hunger, poverty and unemployment. For instance, Dorling concludes:


The "problem" with global population - if there is one - is too many rich people consuming too much, not too many poor people. There are not that many rich people on the world, but there are a few rich people who consume a huge amount of our collective resources.

I disagree. I think the problem is we have a system which gives a tiny minority vast wealth because it is based on the blind accumulation of wealth for profit. It's that economic organisation that destroys the planet. Its those multinationals that burn the oil and fossil fuels and encourage more consumption and production. It's not the consumption of the rich, (nor the consumption of the masses) but the system that puts profit before anything else. And, as a by-product, it is capitalism that also produces the inequality that Dorling rightly rages against.

But this criticism aside, Danny Dorling's book is a well written powerful destruction of the "over-population" argument. It stands out for its focus on inequality and his discussion of class in this context. Written in an accessible, entertaining style but not one that omits the crucial facts and figures. I highly recommend this to anyone wanting to understand population debates particularly those from the environmental movement.

Malthus - An Essay on the Principle of Population
Posted by Resolute Reader at 6:58 pm