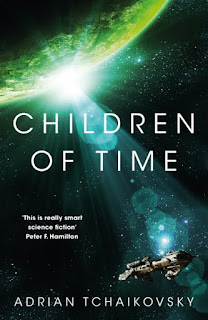 This is an unusual and sometimes strange novel. It follows two attempts by humanity to colonise and terraform far distant worlds. The first of this is abruptly terminated when human civilisation collapses, but not before colonists have seeded a planet with earth creatures and a virus intended to allow the apes they've left to evolve rapidly into humans.

The second expedition follows the second colonisation attempt by a new human civilisation that has grown up on the ruins of the old. These are fleeing an Earth that can no longer support human society and have the old world's star charts to follow. When they arrive at the seeded planet they find things have not gone as the original mission intended.

The novel's chapters alternate between what takes place in space, mostly on humanities ship, and what's taking place on the planetary surface. I won't describe the latter as its too much of a spoiler, and frankly, part of the fun is in watching this develop through the book. But I should say there are some interesting discussions about gender and society as a result of Adrian Tchaikovsky's very alien civilisation.

On board the ship we follow the lives of a number of "key crew" who, because they are in suspended animation through the centuries long journey, get to experience all the major events in the story. It's a useful plot device and the main character, who is a academic expert on the old human civilisation, gives a nicely cynical view of events.

This is the first Adrian Tchaikovsky novel I've read and it is certainly different. It's not particularly subtle, but it has a genuinely original set of ideas at its heart and fans of science fiction should enjoy it.
Posted by Resolute Reader at 4:18 pm