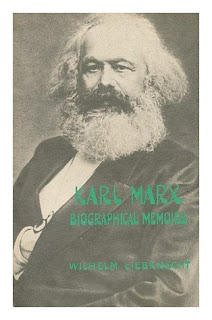 Wilhelm Liebknecht was a founding figure of German Marxism and a leading figure in the German Social Democratic Party. He was a principled activist who spent years in exile during which he met, and became very close to Karl Marx and his family. These memoirs are not particularly political - they contain little about Marx's ideas - except for a brief discussion of Marx's historical materialism and focus instead on Marx and his family. I picked it up because I wanted to read the first hand account of Emmanuel Barthélemy whom I'd encountered in Marc Mulholland's book.

Readers familiar with the biography of Karl Marx will recognise some of Liebknecht's book as the major sources. Liebknecht's account of a pub crawl along Tottenham Court road in which Liebknecht, Marx and their (then) friend Edgar Bauer has become a oft-told story among left-wingers who gleefully recount how the group got into a near fight after challenging some "old-fellows" English patriotism and then fled the police after breaking numerous street lamps at 2am. The book is also the likely source for the accounts of Marx's love of chess and cheap cigars.

At times the book approaches a hagiography. For Liebknecht Marx was an infallible, enthusiastic and important teacher. He does acknowledge Marx's tendency to feuds and polemic, but locates this all in Marx's desire for political clarity and the strengthening of the revolutionary movement. Perhaps most importantly the book challenges any idea that Marx was an uncaring, miserable revolutionary hidden in the British Library. Liebknecht attests to Marx's inability to ignore the plight of an impoverished child, describes a nearly dangerous encounter when Marx tried to save a woman being assaulted by her husband and attests to Marx's love for poetry, literature and his friends. The Marx home itself is a place of welcome and friendship - Marx's wife Jenny was a welcome support to many of the lost and isolated exiles around the group. Liebknecht saw her as a mother figure having lost his own mother very early, and the terrible poverty which they all lived in - as well as the early deaths of their children, clearly moves the author long after events.

It's a melancholy book. Wilhelm Liebknecht is writing his memories, together with the recollections of Eleanor Marx, towards the end of his life and the final section - when he returns to the London of his youth to find the places that he, Marx and the wider circle of exiles argued, debated and laughed - is tinged with real sadness. Marx was clearly a towering political figure for Liebknecht, but also a close friend - the description of his first meeting with Marx and Engels as they cross-examine him over beer and food gives an idea of how Marx would allow people into his inner circle, but only if they could demonstrate their political principles. Once in that circle however, Marx and his family would gladly give everything they could.

The book is not easily available. But it is online at the MIA while it is not a starting point to understand Marx's ideas - it is the basis to understand him as a person.

Mehring - Karl Marx: The Story of his Life
Gonzalez - A Rebel's Guide to Karl Marx
Marx - Capital Volume I
Löwy - The Theory of Revolution in the Young Marx
Posted by Resolute Reader at 9:45 pm