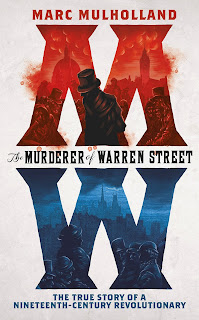 On December 8th 1854 Emmanuel Barthélemy visited the home of his employer George Moore together with a woman. After a discussion that became an argument Moore was killed and, during his escape, Barthélemy shot a second person who was pursuing him. As a result, Barthélemy was eventually executed.

It is an intriguing setup worthy of a detective novel. Who was Barthélemy? Why kill George Moore? Who was the woman with him? What was in the document that she read aloud that enraged Moore and led to a deadly struggle? The setup becomes even more interesting when we unpick more about Emmanuel Barthélemy himself. He was no ordinary worker - rather he was a leading French revolutionary, a man who had fought on numerous barricades, commanding one in Paris during the 1848 Revolution. But how did he end up in England? Why commit murder? And why George Moore?

Marc Mulholland's thrilling historical book reads very much like the novel I assumed it was when I first picked it up. But rather than a novel it is a book that puts a seemingly minor murder in a grand sweeping historical context. Mulholland expertly depicts a France where hundreds of thousands of ordinary workers and peasants had repeatedly engaged in a life and death struggle for social justice. For those of us who have identified with "revolutionary" politics during decades devoid of European revolution, the years of Revolution in France seem like a fairy tale - yet for individuals like Barthélemy there were decades when a new world seemed only a mass uprising away.

Barthélemy was not alone - he was part of a wider network of radicals and particularly identified with the revolutionary Auguste Blanqui whom he once planned to spring from jail. He was acquainted with Marx and Engels, though his impatience, as well as his uncouth manner (Jenny von Westphalen, Marx's wife, disliked him) and political disagreements led to a characteristic split from Marx's circle. In his memoirs of Karl Marx the German Marxist Wilhelm Liebknecht remembers Barthélemy and notes how even his death mask the revolutionary bore an expression of "iron determination".

The story of Barthélemy's life which forms the core to this history reads at times like a Boys' Own adventure. There is a detailed account of a duel in which Barthélemy kills an opponent who had slurred him; there's also a thrilling escape from a French prison over the roof tops and an escape from the barricades following a defeated insurrection. But what's remarkable about the book is that it is so much more than just this. Barthélemy's life can only be understood in the context of the enormous ferment that Europe was going through and the scale of the French revolutionary movements. Few authors could handle both aspects to the story and Mulholland does it extremely well.

For me, the Emmanuel Barthélemy that emerges is a brave but tragic figure. There is no doubting his commitment to the transformation of the world, but his radical beliefs were prefigured on a few brave individuals leading a spontaneous uprising. Barthélemy very much lived these ideals - on several occasions he was prepared to lay his life on the line for his political beliefs. But bravery and spontaneity are no substitute for strategy, tactics and the slow building up of a radical movement. Barthélemy last revolutionary plan - the assassination of Napoleon that curiously ended up in George Moore's second best visiting room - are the actions of a man who has had every other plan fail.

Today few on the socialist left see political assassination as a way forward and thus, to us, Emmanuel Barthélemy is an enigmatic, perhaps even insane, figure. Marc Mulholland's brilliant account helps us to understand how and why such individuals laid their lives on the line; even if we might ultimately look to other revolutionary strategies.

France - The Gods Will Have Blood
Marx – The Civil War In France
Birchall - The Spectre of Babeuf
Jaures - A Socialist History of the French Revolution
McGarr & Callinicos - Marxism and the Great French Revolution
Posted by Resolute Reader at 10:48 pm