Temi Oh - Do You Dream of Terra-Two? 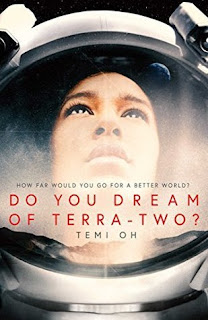 It is 2012 and it's an alternative Earth also on the brink of ecological collapse. Yet there is hope. Back in the 19th century astronomers learnt of the existence of Terra-Two, an earth-like world a few light years from our solar system. Robot exploration tells scientists that it is inhabitable, and ripe for colonisation. The global super-powers, principally Great Britain, dispatch missions to prepare Terra-Two for mass colonisation - its a new chance to start again.

The UK's mission is crewed by a tightly selected group of young adults and an elder group of experienced astronauts. The latter won't live to see the destination but the youngsters will be adults, in the prime of their life upon arrival. Do You Dream of Terra-Two begins with their selection and education, a bizarre mix of Harry Potter and high-science were these gifted students are crammed with information, subjected to a battery of exams and medical tests and go through puberty. With the eyes of the world on them they prepare for space, say good-bye to their families and head off.

Temi Oh does an excellent job on this part of the novel. The characters' back stories reflect the UK in this alternate and our own timeline - the children are from poor and wealthy multi-cultural backgrounds. The different trajectory of history in this novel has not changed Britain's role in the world - only its global position in the 21st century. Some readers may well enjoy the copious references to contemporary culture - one of the six teenagers, the polyglot Poppy, reads Harry Potter in Latin and Korean on the space-ship; and brands like Cafe Nero get plenty of mentions. Personally I found this self-reference a little annoying, like the author was trying too hard to prove that they knew Britain in 2012 to future audiences.

But the meat of the story is the relationships between the astronauts as they get underway. Quickly the pent up tensions and emotions begin to create division on the ship, and teenage hormones don't help. Some of young astronauts have been come through their training hyper competitive, and a strict regime means that despite being in space, their mission becomes more a reality TV show. Oh writes brilliantly about the sense of loss and alienation the young astronauts go through and there is a good portrayal of the depression that one character experiences.

It would be deeply unfair of me to describe how the story continues. Major events early in the book have a lasting affect on the crew's experiences. Oh's portrayal of the mission and its planning highlight the illogicality of seeing young adults as simply being less developed versions of their older selves. A point not lost on those who watch from home. Towards the end, one character's subtle musings on why governments engage in such high-profile, costly spectacles are neatly contrasted with the 2012 Olympic Games.

Despite being in a very science fiction context this is not a highly scientific novel. Oh is well versed in space science; but on occasion I raised my eyebrows at some of the portrayals of the mission. It is, for instance, madness to think that the spaceship would make a stop at a base near Jupiter on its way out of the solar system (why would you give up that delta-v?) I won't mention a couple of others as they give away key aspects of the story; and that's the point really. Temi Oh is writing a novel about relationships, friendship and alienation - not hard science; and any inaccuracies in the latter are about ensuring that the former works better.

This is a unique novel, highly enjoyable, tense and well-written. A brilliant debut and I look forward to the authors' future books, though I hope the ending to this isn't ruined with a sequel.

Burke - Semiosis
Newman - Before Mars
Aldiss - Non-Stop
Posted by Resolute Reader at 9:49 am