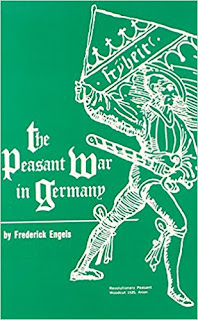 This short work by Frederick Engels is rarely read, but it forms an important part of his contribution to Marxist historical works and theory. Dealing with the German Peasant War of 1525-1526, part of the enormous upheavals that shook Europe during the Reformation, Engels argues that this has it roots in the economic changes taking place in German society, combined with the class struggle between those at the bottom of society and the ruling classes. Engels explains that in contrast to Britain and France which were seeing the rise of "commerce and industry" a consequent political centralisation,

Germany had not got any further than grouping interests by provinces... which led to poltiical division...Uncertain of its own position, the imperial government vacillated between the various elements comprising the Empire, and thereby lost more and more authority... In these circumstances, the position of the classes inherited from the Middle Ages had changed considerably, and new classes had emerged beside the old.

These new classes were beginning to struggle for their own interests. It would be wrong to argue that these new classes were capitalists, or represented capitalism trying to break through. But they were traders, merchants and urban ruling class who were getting wealthy from the "growth of commerce and the handicrafts". They wanted more control over their ability to make wealth, and end to taxes and tithes that stole their wealth and while these "did not overstep purely constitutional limits" they wanted a larger share of power. At the same time there was a growing "plebeian opposition" which "brought together... parts of the old feudal and guild society with the undeveloped, budding proletarian elements of the germinating modern bourgeois society". At the same time, the peasant mass of Germany were struggling under the oppression and exploitation of society, desperate for more land, more wealth and an end to their poverty.

Because the dominant ideology in 16th century Germany was religion, the arguments and struggles played out through religious language, but were about much more than interpretations of the Bible or arguments about religious practice. As Engels explains:


It is clear that under the circumstances all the generally voiced attacks against feudalism, above all the attacks against the church, and all revolutionary social and political doctrines were necessarily also mostly theological heresies. The existing social relations had to be stripped of their halo of sanctity before they could be attacked.

The two key figures in this struggle were Martin Luther and Thomas Müntzer. Engels argues that both of these were shaped by the political and economic milieus that they operated within. Luther, he argues, rebelled within a safe set of boundaries:


When in 1517 Luther first opposed the dogmas and statutes of the Catholic Church his opposition was by no means of a definite character. Though it did not overstep the demands of the earlier burgher heresy, it did not and could not rule out any trend which went further... But this initial revolutionary zeal was short-lived. Luther's lightning struck home. The entire German people was set in motion.

But Luther had to chose his position. And so


He dropped the popular elements of the movement and took the side of the burghers, the nobility and the princes. His appeals for a war of extermination against Rome resounded no more.

Engels writes about Luther becoming more and more the "vassal" of the princes who had the most to gain from the struggle against the nobility. Müntzer on the other hand was the voice of those at the bottom of society. Engels portrays him as anticipating much later political movements; "his political programme approached communism" writes Engels. Certainly Müntzer did have a Communist approach, along the lines of the ideas of Gerrard Winstanley a century or so later.


By the kingdom of God Müntzer meant a society with no class differences, no private property and no state authority independent of, and foreign to the members of society. All the existing authorities, insofar as they refused to submit and join the revolution, were to be overthrown,m all work and all property shared in common and complete equality introduced.

Müntzer set out to organise this. He preached, wrote tracts and travelled to the areas of greatest unrest organising and mobilising the masses. Engels claims Müntzer not just as an early Communist thinker, but an early vanguard revolutionary organiser, who "organised a party of the elite of the then existing revolutionary elements, which, inasmuch as it shared his ideas and energy, always remained only a small minority of the insurgent masses".

Unfortunately the mass peasant armies could not prevail against the organisation of the ruling class, though they has some impressive victories. Tens of thousands were killed, or executed or lost their lands for their rebellion. Müntzer himself is executed for his leading role.

Engels is writing in the context of the defeat of the 1848 revolution in Germany. He's trying to explain why during that Revolution the bourgeoisie was unwilling to carry through its revolution. In essence it is the same reason as why the discontent princes of Germany would not support the Peasants risings in 1525 - they were not willing to lose their own wealth and privilege and preferred to join the suppression of the masses.

The Reformation can be a confusing mass of shifting alliances and religious currents. In this short book, Engels cuts through all of this and highlights the real economic and political changes. He doesn't ignore the story of the war either, but puts it in the context of wider events. There are also fascinating parallels between this and other peasant risings, and looking at the 12 "articles" produced by the German Peasantry I was struck by the close similarities with contemporary risings in places like England - in particular Kett's Rebellion of 1549. This short book is a brilliant example of the Marxist method and is a classic of historical materialism. Few other authors have come close to Engels in their accounts of the period and this book should be required reading for students of the period.