Anatole France - The Gods Will Have Blood 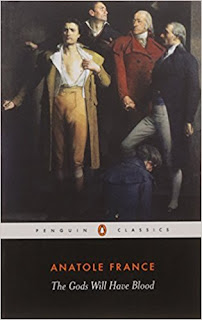 The title of Anatole France's 1912 novel of the French Revolution reflects a common theme for discussion of that historical event. Reading the book in the centenary year of the Russian Revolution its easy to spot some parallels with commentators on 1917. The idea that revolutions devour their children is a common one for those seeking to defend the status quo, and Anatole France was certainly not the first author to use it. But France was unusual in this - he was a supporter of the Russian Revolution and the formation of the French Communist Party.

The problem really is that in this novel France focuses not on the great events of the French Revolution, but on the role of an individual within it. A young, idealistic and extremely naive Evariste Gamelin is the books' central figure. An unquestioning supporter of Marat and Robespierre, Gamelin is swept up within the Revolution. He falls as passionately in love with Elodie Blaise a woman whom he knows through his artistic work, as he does with the ideals of 1792.

The very real threat to Revolutionary France transforms itself into seeing enemies everywhere. As various groups within the new state struggle for power, and to protect the gains of the Revolution, violence becomes a daily occurrence. Gamelin becomes a revolutionary magistrate, tasked with defending France from its enemies and offering justice to those in front of him. His decent into bloodlust is partly a result of the normality of violence, and from a need to appease his peers. Strangely it seems also to create an erotic lust in Elodie. Eventually, and inevitably, Gamelin becomes a victim of the state violence, just as his heroes Marat and Robespierre did before him.

Oddly the novel's story is the least satisfying part. The strength is the individuals portrayed within it. The old, defeated aristocrats hoping for a revival of their fortunes, prepared to comprimise in any way to defend themselves. The corrupt magistrates, prepared to rape the relatives of their victims on the false promise of freedom. The idealistic individuals inspired by the Revolution and depressed by its reality.

What is lacking however, is a sense of the masses who stormed the Bastille and who joined the Revolutionary armies. Here they are a backdrop to the story of naive Gamelin who rose and fell with the revolution. The masses who made the revolution feel thin and shadowy. Perhaps this is why I was left unsatisfied by France's novel, for all the author's talent.
Posted by Resolute Reader at 5:00 pm