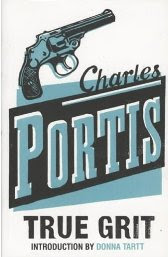 True Grit, is one of those films that everyone can quote at least one line from. I particularly remember John Wayne (that ardent anti-communist and white-supremacist) as Rooster Cogburn drawling "I never shot nobody I didn't have to". [wav file here]

It's a delight then, to find that Charles Portis' original novel has all the excitment of the film, as well as most of the memorable lines (if not the Hollywood ending).

The Wikipedia entry on the novel, has lots about the themes of "transition" and change. It is that, but it's also a fairly straight-forward tale of revenge. We meet Mattie Ross, an aged spinster who looks back on what must have been the most exciting moment of her frontier life - the time she road into the wilderness to avenge the killer of her father. Along the way, we meet a variety of characters, some good, some bad, but all of them flawed who give us a unique insight into some of the whys and wherefores of western life.

Particularly annoying and illuminating is Mattie's christianity, which gives her courage and helps her drive onward. Unfortunately it also gives her an incredibly blinkered view of the world, though her self-righteousness is wonderfully humourous at times. Also interesting at times is the insight into how the civilising force of commerce is seen as taming both the west and the wild men who live in it. Rooster Cogburn is seen in this context as the last of a breed - frontier men whose justice was as hard as the land around them, and whose morals needed to be modernised.

Donna Tart's new introduction to this reprint, rightly awards the accolade of "Cult Novel" to the book. If you liked the film, it's well worth a read, but even if you hate westerns you might get something out of it.
Posted by Resolute Reader at 1:39 pm