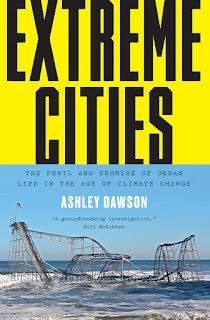 The extreme city is, for Ashley Dawson, the supreme example of capitalism self-confidence in the face of almost certain disaster. The environmental crises that have arisen out of capital's insatiable desire for accumulation impact cities in unique ways, but capitalist urbanism creates a particular set of social structures and physical designs that exacerbate the impact of environmental disaster and further encourage it. As Dawson puts it:


If today's cities are one of the major drivers of climate chaos, they are also its principal victims. The storms of climate chaos are already breaking on human shores and the devastation is most apparent in the planet's coastal mega-cities, where vulnerable infrastructure, massive  economic resource, and human populations are concentrated in unprecedented quantities. The city is paradoxically the greatest expression, principal culprit and most endangered artifact of our turbulent times.

Dawson begins with New York. His home city and, in the period covered, the site of two major disasters. The first on 9/11 led to an unprecedented rebuilding, one where urban designers and architects encouraged a siege mentality with protective bollards and CCTV. Dawson was a participant of the second, albeit in a neighbourhood that took far less damage than many others, when Hurricane Sandy devastated the city. The anti-terrorist architecture was useless against the rising waters, high winds and consequent blackouts. Emergency response teams were swamped and miraculously activists from Occupy New York created, seemingly from nowhere an infrastructure of self-mobilised aid to help the poor and vulnerable. Often these activists were the first and sometimes only people to reach victims, helping provide food, medical aid and building a community response.

The problem, Dawson is arguing, is that emergency response, planning and rebuilding are done in the interest of those best served by the capitalist city itself. Thus neo-liberalism has gutted the public services that make sure that the majority of the urban population have access to services both in and out of times of disaster; but neo-liberalism also shapes the design and planning of cities themselves before and after crisis. In Extreme Cities the rebuilding of New York's waterside communities in the aftermath of the decline of the city's industry serve as a class case-study of this. While the wealthy are able to buy their way out of trouble, the poorest end up losing everything. As Dawson comments, "as Hurricanes Katrina and Sandy demonstrated all to clearly, it makes little sense to talk about urban resilience in the face of climate change without considering how social inequality renders particular neighbourhoods dramatically more vulnerable than their more well-heeled neighbours."

Globally, some cities, most notably those in the Netherlands have built strong barriers to protect their inhabitants. Dawson contrasts those historical large scale public infrastructure projects with the prevailing economic logic:


To imagine that a Twitter or a Tesla would be capable of such extensive public workers - that capitalist corporations, in other words, would address the threat of flooding on such a massive and systematic scale - is to fundamentally misunderstand the task of building infrastructure... which must be holistic or must fail utterly. The fragmentation and advanced decline of public infrastructure in the US- our collapsing bridges, mass evacuations from unstable dams and highways that are more potholes that roads - is a symptom off the neoliberal doctrines of private affluence and public penury.


Even when some attempt is made to build infrastructure in a more thoughtful and careful way - Dawson gives the example of the Living Breakwater project to protect parts of New York's edge, planners often fail to see wider impacts of their projects or even, in the case of Living Breakwaters, the way that plans to have oyster beds on the breakwaters will be negated by ocean acidification. In the case of this particular plan, Dawson highlights a tendency for protective infrastructure to be associated with a "build it back" vision - a return to a rose-tinted past that is impossible within the context of 21st century environmental chaos. In the case of Living Breakwaters, ambitious plans to build floating barriers covered in oysters as a way of re-stimulating the historic oyster industry seems laudable, but idealist in the context of global catastrophe. At least Living Breakwaters have attempted to engage with local communities and consider the wider ecological impact - something that is not true of other projects that Dawson describes.

The reality is, as Dawson makes clear, that we need a radical approach to building out cities. Some of this will involve "retreat" - some cities, including large parts of New York are not viable in the new environmental context - though it would be political suicide for politicians to admit it. The capitalist solution - large scale, privatised infrastructure projects will, at best, only hold the waters back for a limited period of time. But simply retreating and building again elsewhere on the same model is not the answer either. Dawson argues that the most resilient places are those that put the needs of people and planet first; through community democracy and economic policies not based on profit. That will require an entirely new approach - one that breaks with the prevailing capitalist system. Luckily as Dawson reminds us, the populations of cities are not passive bystanders - they have always been a key part in revolutionary processes:


Cities are the point of greatest vulnerability for the global 1 percent, not just because they possess symbolically resonant rallying sites for the dispossessed... but also because they concentrate the accumulated assets of the world's wealthy in physical form.... As command nodes of the global economy, cities are sites of vulnerability for elites. Revolutionary movements of the past two centuries have almost always had an urban dimension, and sit should be no different in a period of rapid urbanisation.


As Ashley Dawson's excellent book reminds us, the future of the city lies in a new type of political and economic system. Luckily that is not simply wishful dreaming. Whether Paris in 1871, Petrograd in 1917, Cairo in 2011 or in many other examples, urban populations have played a central role in fighting against their exploitation and oppression, as well as creating and recreating their spaces anew. Herein lies the future.