Joseph Arch - From Ploughtail to Parliament: An Autobiography 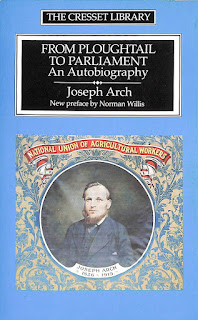 Autobiographies are strange texts. As an account of the author's own life they are supposed to be an accurate description of what took place, but they are really the account that the author would like to pass on to posterity. Joseph Arch's account of his life as an agricultural labourer, then trade unionist and finally MP is fascinating for its detail. But it is also of interest for what has been left out, or downplayed. As such I highly recommend it is read in conjunction with Pamela Horn's biography and commentary by Alun Howkins. While self-serving in places it is an very interesting insight into the ideas and activities that dominated rural trade unionism in the 1870s by someone who was at the heart of that struggle.

As we approach the centenary of Arch's death it is worth reflecting on the sweep of his life. He was born in 1826 in the village of Barford, and the early chapters of his autobiography are fascinating for their detail of the lives of agricultural labourers. Life for the Arch family, as for almost every labourer, was marked by dire poverty. Arch's family were slightly better off as they owned the freehold to their cottage as a result of his Grandfather saving £30 over many years in an old sock. Most labourers did not have this security and risked losing their homes if they challenged the farmer or landowner. This was to give Arch enormous security in later life as he became a thorn in the local establishment's side and then a leading trade unionist.

Arch's early memories contain a great deal of class difference and struggle. He remembers peering through a crack in the Church door to see his father waiting for Communion in a separate queue to the local gentry and farmers who get seen first. At school his poor clothes are a source of conflict, “sons of the wheelwrights, the master tailor and the tradesmen… peacocky youngsters would cheek the lads in smock-frocks and many a stand-up fight we used to have – regular pitched battles of smock-frock against cloth-coat they were, in which smock-frock held his own right well.”

His mother challenges the parson's wife who wants to impose a particular haircut on Arch's sisters - and they never receive charity again from the vicarage. More seriously Arch's father refuses to sign a pro-Corn Law petition got up by the farmers and is out of work for 18 weeks.

Arch's family was not unusual, and it is no wonder that in the late 1860s and early 1870s trade unionism begins to take off in a serious way in the English countryside. Arch by that point is a skilled worker and preacher for the Primitive Methodists, he is also a strong supporter of the Liberal Party and he is called upon to help set up a local trade union by workers in the nearby village of Wellsbourne in Warwickshire. Once convinced that this is a real attempt, Arch takes to this with enormous enthusiasm and the union rapidly grows in strength.

Reading the autobiography you get the impression that Arch was the only driver of the union. Other biographies and histories show that actually there were numbers of unions being setup at the same time, and many of these merged to form a national union (though significant sections did not). Arch speaks in hundreds of villages building the union and driving it forward, but so do many others. A great weakness of the book is that neglects what is taking place in the world beyond Arch's immediate influence. A second weakness is that Arch is utterly unable to acknowledge mistakes or defeats. The union strike wave that takes place in the 1870s after the union is founded is defeated by a lock-out in the Eastern Counties. The union, and Arch, take a pretty miserable attitude to the final outcome but this is omitted from Arch's account.

In his introduction to my edition, Alun Howkins points out that Arch is also selective about who appears in his book and also doesn't go into the detail of the major rows that took place. Nor does he acknowledge that the union he put so much energy into declines and collapses in the 1880s. The book was published before Arch's parliamentary career was over, but it is selective about his time in Parliament - in fact it was a tremendously difficult time for him. Arch rarely spoke in Parliament and didn't speak at all for the last 6 years! But Arch still portrays himself as a major fighter for the labourers cause.

From other sources one gets the impression that Arch the MP was completely out of his depth. The first agricultural labourer in Parliament was cut off from his base and support and surrounded by wealth and privileged. In fact Arch clearly loved the company of the famous - he was enormously enamoured of Gladstone, and because his constituency covered the Norfolk estates of Sandringham he vowed to be an MP for labourers and the Prince of Wales.

Arch was a contradictory figure in many ways. A brilliant trade unionist but at times he was also remarkably conservative, but then could be very radical - supporting Home Rule and opposing British colonialism in South Africa and Afghanistan. He hated the ideas of socialism, preferring to imagine a countryside free of class conflict where everyone had their place, but the labourers had a decent wage and a small amount of land. But nonetheless for thousands of agricultural labourers and their families Arch helped them have a sense of a better world. The victories won by the union were significant, if not long lasting, but they proved that agricultural workers could organise and could win. And for all his faults Joseph Arch never gave up his belief in the power of organised workers - and nor should we.