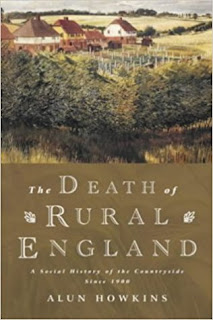 Alun Howkin's book The Death of Rural England is a sweeping history of the transformation of the English (and occasionally Welsh) countryside in the 20th century. It is a fascinating read, that never loses sight of the fact that the landscape is, and was, shaped by the labours of thousands of men and women and those people today, and their ancestors, remain an integral part of what makes up "the countryside".

The century that Howkin's covers saw enormous change, he points out that "since at least the eighteenth century rural society had been divided into landowners, farmers and labourers. By the 1990s the farm labourer had all but disappeared.... By the 1980s... the majority of country dwellers who lived in the rural areas... had nothing to do with farming as an industry". Why this happens has many factors - not least the full development of capitalist farming and the integration of farms into a wider, national, agricultural system. This was a process that begun in the 19th century and continued to develop, encouraged and accelerated by both world wars. But it was a system that retained many old traditions, often related to employment rights or relations. These often were eroded (or smashed) as part of the transformation of agriculture.

The later part of the 19th century had seen the growth of the first agricultural trade unions. These revived in the early 20th century, encouraged, as Howkin's writes, by a "new kind of rural worker - the railway men". In Lancashire rail workers were central to victories of agricultural workers, because they were "unionised, free from the threat of parson and squire, yet often the sons of farm workers... [they] brought the first signs of a new culture into the countryside of England and Wales".

Agricultural workers' organisations would prove central to ensuring that working people in the countryside could resist the impact of the sweeping changes that were taking place. In particular, the years between the wars, called the "Locust Years" saw enormous poverty in the countryside as workers suffered with the sudden withdrawal of government subsidies for farming. The unions were unable to stop the destruction and "between 1921 and 1931 about 60,000 workers left agriculture and between 1931 and 1939 a further 100,000". As Howkin's points out, for the farmers it was "reducing costs" but to the workers it was "the loss of livelihood and often a way of life".

Additionally we see the rise of mechanised farming. Tractors did not truly supplement animal labour until after the Second World War. Though that war was a key moment in transforming agriculture and I would argue, shifting it towards fossil fuel farming. But we shouldn't simply see the impoverisation of the agricultural labourer as arising out of mechanisation - it was primarily to do with the interests of capitalist farming.

Howkins points out the centrality of women to agricultural labour in this period. His writing is supplemented by many fascinating accounts by women of their own work. The "combined income" of the family was often what kept things going as wages were so low. Here's a description from the "daughter of a jobbing gardener, farm worker and (very) small holder" in Sussex in the 1920s:


With the money that he earned and the garden produce from our own plot of land, we were much better off than before. To supplement fathers income mother made jellies, jams, pickles and wines. They were much in demand... We children had the task of picking the wild fruits in season... We also had to take our turn stirring the great pans.... Some of the ladies in the village would buy a jar but most of it was packed into wooden crates and these would be collected by Carter Paterson the carrier and taken to the various universities that were attended by the young gentlemen of the village.

Howkins points out how the perception of rural England changes too. Increasingly it is seen (and portrayed) as a place of leisure and relaxation - the opposite of the towns and cities. He traces here the development of tourism and how this affected the countryside and argues that today, modern politicians fail to understand the countryside as a place of work and farming. The environmental movement too began to take an interest, especially post 1960s. By the end of the 20th century Howkin's argues, the countryside was in crisis and politicians had lost any view of how to solve things. He argues that the appalling failures of government during the BSE and Foot and Mouth crises reflect this, and that 2002 policy documents showed that Tony Blair's Labour also had not real idea about how to move forward:


The familiar countryside environment - originally a product of farming and damaged by years of intensive production and the social fabric of the countryside (which depends heavily on farming) is being put at risk.

Howkins' argues that in the "battle" between town and country, the town has been "victorious". Now the countryside is the plaything of the urban dweller and everyone else will become subsumed into that. I wasn't entirely convinced - I think it is entirely possible to imagine a re-emergence of "British" agriculture, but it will have to be based on an entirely different system to the highly subsidised, highly capital intensive and highly chemically based agriculture that currently dominates. It will take radical policies from future governments to achieve this, as well as a new approach to the countryside which sees it as more than simply the place that is not the town. Alun Howkin's book has shows us about how the modern countryside has arisen and gives a few pointers to how it could be different.

One small note: My edition of this book was purchased in 2015 and has a number of missing pages due to printing errors. I'm using this platform to record how disappointed I am that I was unable to get the publishers (Routledge's Taylor and Francis Group) to offer a PDF of the four missing pages, never mind a new copy.