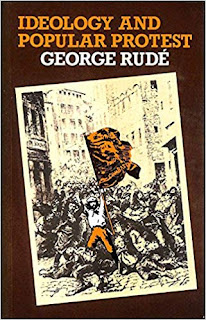 Despite its short length this is a detailed and powerful argument that studies how ideas in pre-capitalist protest movements developed. It begins with a closely argued discussion, from a Marxist point of view, of the idea of class consciousness. George Rudé begins with Marx and Engels, showing how they saw ideas arising out of concrete circumstances and then changing through the experience of a changing world and class struggle. Rudé then continues by looking at other Marxist thinkers who have developed these ideas, particularly the Hungarian Marxist György Lukács and the Italian Antonio Gramsci.

But the main argument of the book argues that Marxist theory of the ideology of working-class protest leaves "little room for the struggles of peasants and urban shopkeepers and artisans" in both present day or pre-industrial societies. This is not surprising says Rudé - Marxism developed its ideas in an attempt to understand the "struggle between the two major contending classes in modern industrial society" and this is not strictly applicable to other classes. The remainder of the book is an attempt to develop a "new theory" that works for these groups in capitalism and previous societies.

Rudé argues for a "Popular ideology" which is contrasted to "class consciousness" a "fusion" of two parts,


of which only one is the peculiar property of the 'popular' classes and the other is superimposed by a process of transmission and adoption from outside. Of these, the first is what I [Rudé] call the 'inherent' traditional; element - a sort of 'mother's milk' ideology, based on direct experience, oral tradition or folk-memory and not learning by listening to sermons or speeches or reading books.... the second element is the stock of ideas and beliefs that are 'derived' or borrowed from others, often taking the form of a more structure system of ideas, political or religious...

In my own work on peasant struggles, it is clear that these definitions have a real basis. There are numerous examples of peasant struggles that have been based on perceived "rights" that are rooted in the distant past, popular belief or have semi-legality. These interact with the beliefs received from outside - whether in church or law courts - and often take on new meanings, forming the basis for struggle - collective or individual. Later Rudé argues that whether the "resultant mixture" took on "militant and revolutionary" forms or their opposite, "depended less on the nature of the recipients or of the 'inherent' beliefs from which they started than on the nature of the 'derived' beliefs compounded by the circumstances then prevailing and what E.P. Thompson has called the 'sharp jostle of experience'." In other words, a third element is the ground upon which ideas arrive - the living circumstances of people. Not every group of people who heard a radical preacher like John Ball or read Thomas Paine would necessarily take it and turn towards radical action.

Rudé then examines a number of situations to show how his ideas hold up to reality. These include useful summaries of the English Peasants Revolt of 1381, the German Peasant Wars of 1525 and other rebellions, including the French Revolution and 20th century experiences of agrarian struggles in Latin America. When writing about riot and protest in England in the 18th century, Rudé concludes that the ideology of these "pre-industrial" protests


corresponded broadly to what has been said before: overwhelmingly 'inherent' traditional and apolitical in the case of food riots, strikes and rural p[rotest of every kind; and only touched by the 'derived' ideology of the bourgeoisie - political and forward looking - in the case of the London riots... But the forward-looking elements was still skin-deep even in such riots, and popular protests... still looked to the past; or, in EP Thompson's phrase, the 'plebian cluture'... 'is rebellious, but rebellious in defence of custom'.

This sense of rebellion in defence of tradition or past (invented or otherwise) is extremely useful, and Rudé argues, holds over into more contemporary industrial (he argues until Robert Owen), but is inadequate. In these times, the "ideology of the common people" has had to be "reinforced by an injection of 'derived' ideas, or those of generalised ideas based on the memory of past struggles, to which Marx and Engels... quite simply gave the name of 'theory'." Here Rudé is arguing that the workers' movement has been weakened where it lacks socialist theory. In this regard, I think he is too reliant on a particularly interpretation of Lenin's writings in What is to be Done arguing that socialist theory has to be imposed from outside; an interpretation that has been challenged recently. Despite this criticism, this is a valuable book from which I gained a great deal of insight and I recommend it to those working on peasant questions and struggles today.