Reg Groves - Sharpen the Sickle! The History of the Farm Workers' Union 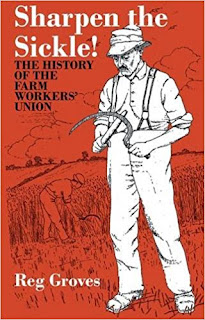 This lively account of the history of British agricultural trade unionism is written by one the UK left's most interesting characters. Reg Groves was a Communist who wrote briefly for the Daily Worker but ended up breaking with them and becoming influenced by Trotskyism. Eventually he became well known as a Christian socialist, remaining true to the socialist cause for his whole life he made links with Trotskyists from the new left in the 1970s.

He wrote, or jointly authored, a number of popular histories of radical movements. I reviewed his book (jointly written with Philip Lindsay) on the Peasants' Revolt of 1381 previously on this blog. They are all aimed at a mass audience and are often entertaining reading. A note of caution though, Groves on occasion is a little lose his historical accuracy and books of his like Sharpen the Sickle! have no footnotes, so those reading them for research might want to have other sources to hand.

Nonetheless Sharpen the Sickle! is a powerful read. It begins with early attempts at trade unionism in the countryside, briefly touching on the Tolpuddle Martyrs before discussing the struggle by Joseph Arch to found and maintain a national union in the early 1870s. Groves is found of focusing on key individuals in the movement - reflecting a close connection with many of them. But the doesn't ignore the forgotten rank and file, and indeed, where possible he celebrates some of the smallest struggles in order to put rural trade unionism into context.

The defeat of Arch's union in the mid 1870s, led to a difficult period economically and organisationally for the agricultural worker. The late 1890s saw a brief revival in fortunes, but it wasn't until the 20th century that trade unionism was back on the agenda. Once again it arose out of the absolute poverty of the countryside and despite the braking role of the liberal politicians that helped found the new unions, workers quickly moved into battle. In addition to the intransigence of the farmers, agricultural workers face a number of issues that make it harder to organise - seasonal and temporary labour; (at the time) tied cottages and so on. But Groves shows how the union was able to over come these and build a mass base.

The 1920s brought economic decline and collapse in wages after the UK government abandoned its support for agricultural post World War One. But the workers fought back with a major strike in East Anglia in 1923 that helped to stem the losses. It seems that agricultural unions played little or no role in the General Strike that closely followed this, at least according to Groves' account. The 1930s were the "lean years" and the union fought a rearguard action through the Labour Party to try and gain better conditions for the workforce. Labour in the 1920 and 30s played a dirty role in betraying the hopes of its working class base, and agricultural workers suffered more than most. The final chapters then are Groves' account of the small gains they did make and the impact of World War Two.

Interestingly, Groves' radical politics come out at the end when he comments on the limitations of agricultural trade unionism in the context of capitalist farming, echoing Marx's writings on the metabolic rift.


But it would be wrong to leave the impression that the NUAW [National Union of Agricultural Workers] as a whole has yet expressed its final opinion on the future of Britain's agriculture. So far, it strives against capitalist agriculture only to get better conditions for its members, it seeks adjustment rather than drastic change. This, however, puts the NUAW in a halting place, a half-way house, untenable in modern conditions. Not only does this leave the status of the farm worker unchanged; it also leaves untouched the fundamental unsoundness of present-day agriculture. For capitalist industry and agriculture broke the essential social and individual relationship between man, his work and community life, and the land, which was the basis of the oldest subsistence farming. The freeing of land and labour from exploitation and destruction is only possible if it purposes to restore men's co-operative relationship with the soil.