Wilhelm Hasbach - A History of the English Agricultural Labourer 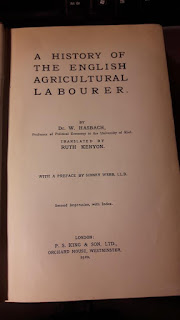 This classic study of English agriculture was first published by the author in Germany in 1894 and translated into English in 1908, where it was reprinted several times. I read the 1920 edition which has an introduction by the famous Fabian socialist Sidney Webb reflecting the left leanings of the writer.

Hasbach's History of the English Agricultural Labourer is a fantastically detailed work. Some of it is, without doubt dated, and on occasion the constant repetition of facts, figures and dates makes it tiresome to read. But Hasbach manages to show how, within the broad sweep of historical development, the peasant and then the labourer in England's rural economies had their lives transformed. The first chapter looks at the feudal manor as an organisation unit for labour and rent. But Hasbach is only interested in these feudal arrangements for how they frame the later development of capitalist agriculture.

Hasbach repeatedly emphasises that the rural masses were very much the victims of agricultural development in England. They were pushed from their land, had their wages constantly driven down, and faced all sorts of legal restrictions on their ability to improve their lot. Enclosure, for instance, didn't simply remove people from the land, destroying their homes and communities, but those that remained found their lots immeasurably reduced.


As for the great mass of the cottagers and squatters, it is obvious that to them division meant simply that the very backbone of their economy was broken. They had few friends, and many bitter enemies, and were unable to get their case represented in Parliament. They could do nothing, and went empty away....The wastes being divided, shelter and firing were no longer to be had for nothing. Men must either pay or go without. And in very few places was any compensation paid for this loss.

Hasbach sees enclosure not as a simple change to the organisation of the countryside which brought about mass depopulation, but also a transformation in the economic relations. New forms of labour are developed (which he explores in horrific detail) such as the gang systems. This is agriculture designed to maximise profit.

Hasbach looks at how many reformers tried to understand what these changes had done to the population and how things might be improved. A whole variety of strategies were looked at - from the creation of allotments, to the recreation of rural communities. One 18th century commentator, Richard Price who regarded "the agricultural changes mainly from an ethical, social and political standpoint" and had a rather romantic view of the "earlier stages of civilisation" based on small holding farming, argued that there was a need to "drive back the inhabitants of the towns into the country. Establish some regulations for preserving the lives of infants. Discourage luxury and celibacy, and the engrossing of farms".

This is an extreme approach, but it does highlight one problem of the time when discussing the conditions of the poor, one that Hasbach himself repeats, which is the lack of any believe in the poor themselves playing any role in the improvement of their situation. They are passive recipiants of government plans, or reforming strategies. As a result Hasbach also fails to highlight in detail any of the great acts of resistance by the rural communities. In fact, when he does comment on these events, it tends to be in a negative way.


The constant war which the pauper has to wage with all who em,ploy or pay him i destructive to his honest and his temper; as his subsistence does not depend on his exertions, he loses all that sweetens labour.


The demoralisation reached its height when labourers revenged themselves on obnoxious farmers by rick-burning. It was was not uncommon for several fires in one night to proclaim grimly and plainly to the propertied classes the destruction o the ancient concord of the village community.

But at times rick-burning etc became a genuine mass movement in the countryside that went far beyond simple revenge on obnoxious farmers, taking up questions of wages, village organisation and made attempts to democratically control aspects of peoples' lives such as by the removal of particular over-seers. This brief paragraph neglects the strikes, protests and other mass actions of the rural class struggle.


On occasion modern readers will smile at Hasbech's 19th century prejudices. Several times he suggests that part of the problem was that rural labourers were too ignorant to understand their position, particularly in regard to the employment of children. In others his language is very dated, as when he writes that "the prettier and livelier country girls sough situations in the towns and returned no more". But despite this, the book echoes with Hasbech's deep sympathy for the poverty and problems of the rural masses throughout history. This means that his discussions on the family wage, children employment, gang labour and the levels of wages don't ignore that behind all these things are real sufferings that he hopes can be alleviated. Thus he can write in the conclusion:


Up to the present time the two most important stages in the history of the agricultural labourer have been, first, his acquisition of personal freedom and second his severance from land and capital. The first was an historical process, desired by many but... intended by no one. The second was, on the contrary, definitely intended, end as well as means, by many people. They desired to place proletarian labouring class as the disposal of the farmer, believing that such as step was in the interest both of employers and the public.

Hasbach however, can only see the solution as being a return to some sort of closer relation between land and labourer. This means the redistribution of land and a vast increase in the numbers of small holdings. This Hasbach believes, will also bring the added benefit of strengthening protectionism against free-trade, which Hasbach saw as being a driver of the impoverishment of the rural masses.

These are conclusions that are tied up in 19th century economic debates and few will read this book to rediscover them. But Hasbach's book is a treasure trove of detail of the economic lives of the rural population of England, it never romanticises that life, even if it sometimes neglects the role of ordinary people in resisting the changes that took place.