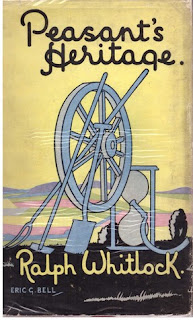 There is a particular literary tradition in England, of books that recount life in the countryside, or on farms. Some of these are justifiably famous, like Cider With Rosie, others are forgotten gems, like Adrian Bell's Men and the Fields, which I reviewed here. When I reviewed Bell's book, I made the point that there is a danger when writing about the rural past, that one falls into the trap of seeing the world through rose tinted glasses. Agricultural life was, and continues to be, hard work.

Ralph Whitlock's book is unusual, not in its subject matter, but because the majority of the text is devoted to his life as a farm labourer. Whitlock was from a very poor background, his mother narrowly avoided the workhouse because their deceased father had managed to build the family their own home. From his early teens, Whitlock worked in the fields, trying many jobs, though disliking most, except for his time as a shepherd.

First published in 1945, this book is pitched by the publisher (no doubt bending to some government propaganda wind) as a celebration of the life of the labourer, the "English peasant ... the same man as his forefathers, the men who fought and won Agincourt, the men who made the face of rural England with crude tools and by hard work, and defended as passionately as they worked for it."

Despite this rhetoric, the book is far more interesting. In part because of the descriptions of forgotten aspects of farming, in part because the hardwork, the poverty and the long hours are eye-opening. Whitlock's style is not as florid or poetic as Adrian Bell, but its not without humour and insight.

One interesting aspect to Whitlock's early life was the way that contracts with farmers lasted a year, from Michaelmas to Michaelmas. During that year, you were effectively tied to a particular employer, and only able to move on once that year was up. This enabled the young worker to try a different number of jobs, and find one suited, as Whitlock says "one year as a ploughboy was enough for me. When Michaelmas came again I made haste to get back to Uncle Jacob and the sheep." 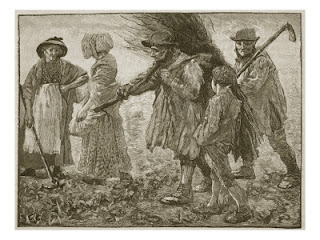 Violence and abuse of young workers was clearly an accepted part of rural life. The man he works for as a ploughboy throws clods and rocks at him when he makes a mistake. But there was also laughter and free time. Whitlock learnt to play an instrument, worked long hours, but walked great distances to woo potential partners. Village life was centred on agricultural work and the church, but there was singing, dancing and games.

Towards the end of the book, Whitlock earns enough, through his and his wife's hard work to purchase land and a smallholding. But this is threatened by the changing of government subsidies between the wars and the economic recession. The Second World War was a return to boom time for farmers, and Whitlock's discussion of the expansion of farming in that period is fascinating. For those interested in agricultural history, this is a must read. For those who want to know more about those who shaped the British countryside, this is an entertaining piece of social history.

Bell - Men and the Fields
Archer - A Distant Scene
Thompson - Lark Rise to Candleford
Posted by Resolute Reader at 7:10 pm