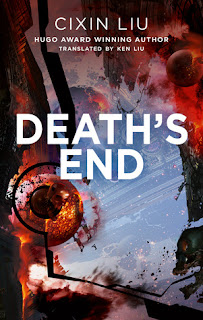 Any review of Liu Cixin's Death's End has to simultaneously be a review of the whole of his trilogy. These are three interconnected works that rely on each other, despite their self-contained stories. The trilogy deals with humanity's first contact, but it is a first contact in a deeply hostile universe. The three books look then at how humanity through hundreds of years goes through various crises that result from the different aspects of knowing alien life is real, meeting them, discovering that they are threatening, and finally, not impotent.

Liu Cixin is adept and thinking outside the box of 21st century society to imagine how humans might deal with such threats in the future. He's a little overly optimistic in thinking that transnational institutions such as the UN might play this role - and at times his belief in human society working collectively towards a particular technological goal, through the medium of maximising profits feels more utopian than ambitions of light-speed travel.

That said, the author creates a believable future history that spans three remarkably different books. Unlike some SF authors who have written "future history", such as Isaac Asimov, Liu Cixin manages to describe huge social changes and people well. In fact, one of my disappointments was that the reader invests a lot of emotional time in the different individuals at the heart of each book, only to find them playing peripheral roles in the sequels.

Death's End is a fitting finale. It reminded me of Joe Haldeman's Forever War were hibernation is used by the central characters as a form of time travel - allowing them to wait until particular events happen, or technologies develop. As in Haldeman's work, there is great delight for the reader in the as each new era gives the characters social problems as they adapt to changing social norms. In Death's End Liu Cixin uses gender as a way of describing the characteristics of different epochs of humanity. People take on more feminised aspects and styles when society is more confident and expanding; as it becomes desperate and warlike the fashion is toward the more rugged male image of our own times. I'm not sure its a great analogy, but it does create a sense of a changing, evolving society.

Cheng Xin the woman at the centre of this novel, begins as a failure. Her initial role, to protect humanity, is disastrous because the aliens are not convinced she is prepared to make the sacrifices necessary to defend Earth and its solar system. This is a kill or be killed universe and humans have yet to understand the nuances of this. As time develops she becomes a much more nuanced enemy. Through her, we follow humanity's emergence onto the galactic stage into the midst of a very hostile audience.

Death's End is pessimistic - both in terms of its portrayal of the wider universe and humanity's ability to collective respond to situations. In Cixin's view, humans are all to prone to seize on the next hope, or plunge into despair. A particular scene when a false alarm creates a panicked attempt to evacuate Earth is very well described and might be seen as a metaphor for the way in which different parts of the world will react to climate change.

This trilogy will become a 21st century classic and deserves to be read far beyond the confines of a SF&F audience. The author has a tremendous grasp of history, literature and science and has created a terrifying future. Each book has its different style and emphasis, and they are very much individual works tied together with a single narrative. You could do a lot worse than spending a week locked indoors with these three books.