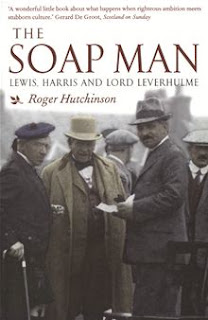 Part history and part biography, The Soap Man is an impressive account of the clash of two modes of production. Lord Leverhulme the industrialist of Port Sunlight fame was a classic example of the capitalist who believed that organised correctly and benevolently the system could bring happiness, wealth and employment for all.

Having made his fortune creating a model (or so he thought) community near Liverpool whose workers toiled in his soap factories, Leverhulme's gaze turned elsewhere. In 1918 he bought the island of Lewis in the Outer Hebrides. The act of purchase wasn't simply about owning the land. The old semi-feudal laws that still existed in the Isles meant that Leverhulme effectively became the owner of everything on the Island, towns, roads, people. The new Laird was determined that Lewis would be remodelled in the image of Port Sunlight. He dreamed of technology and capitalism reinventing the Island, creating enormous amounts of wealth and dragging the people of Lewis out of the dark ages.

Roger Hutchinson speculates that Leverhulme wasn't so much the benevolent capitalist as a clear thinking man of money who recognised, at least in part, that the gigantic turmoil that had shaken Russia at the end of World War One would have its echo even in far flung bits of Britain. His desire to improve the lot of the workers, was less about helping them and more about stemming the tide of revolution. But he also viewed the islands with pounds signs in his eyes. In Leverhulme's vision the old crofting way of life should be destroyed so that the true wealth of the island, as a source of wood, a base for fishing and growing industrial quantities of fruit, could make him even wealthier. There would, naturally be a trickle down effect and the people of the island would benefit, as would the thousands of other workers that would stream into the cities and towns that would spring up on the beautiful island.

The problem was, that the people of the island, in particular the returning soldiers and sailors wanted nothing more than a piece of land to call there own. The 1886 Crofters Act had indeed promised them this and offered, for the first time, in a bleak and difficult history, security of tenure that their ancestors could only have imagined. Free from eviction they would be free to farm as they wanted.

Leverhulme couldn't see this. To him, these were backward people, living the lives of savages and this needed to be uprooted. To the crofters and their representatives, who initially welcomed him with open arms. his schemes were interesting, but not for them. They wanted land. Hutchinson has unearthed some extraordinary accounts of the clash between the people and their landlord.

The seen is early in the morning, a large group of people, Leverhulme is at the centre. He speaks in English through an interpretater. Most of the assembled group only speak Gailec. Many of them had taken part in raids only the day before to seize land for their families.

Speaking through an interpretor to a crowd of crofters, Leverhulme derides their way of life:

"The fact is, your fishing is presently carried on is a hit or miss. I want to make it a hit every time. How can I do that? Well everytime you now put to sea you blindly hope to strike a shoal of herrings. Sometimes you do. Oftener you don't. But there shoals are there if you only know the spot. and that is were I can help you. I am prepared to supply a fleet of airplans and observers who will scan the sea in cricles around the island. An observer from one of these planes cannot fail to notice a shoal o herrings over which he passes. Immeiately he sends a wireless message.... the boats are headed for that spot and next morning they steam back to port loaded with herrings......"

Alan Martin "a prominent raider" who had been organising the occupation of land. spoke next. In Gaelic, for a long time. Leverhulme's translator explained the speech, which finished like this.

"This will not do. This honey mouthed man would have us believe black is white and white is black. We are not concerned with his fancy dreams that may or may not come true. What we want is the land and the question I put to him now is; will you give us the land?"

To which Leverhulme answers, "No. I am not prepared to give you the land."

A former serviceman, MacLeod spoke next at length, his speech finished like this:

"Lord Leverhulme, you have bought this island. But you have not bought us. We refuse to be the bondslaves of any man. We want to live our own lives in our own way, poor in material things it may be, but at least it will be clear of the fear of the factory bell; it will be free and independent"

Here, summed up is the clash between two modes of production. On the one hand a way of life that brings little riches, but has existed for hundreds of years, that provides for the needs of people and would give happiness. On the other is the desire to exploit the natural resources of Lewis in the interest of making money. Leverhulme's cannot understand why the crofters won't accept his changes, because he viewed 20th century capitalism as the pinnacle of human achievement.

At one point, he refuses his personal piper holiday leave, because the man wanted to go home to his croft and plant potatoes. He explained that with his wage labour on the estate he could buy all the potatoes he wanted. When the farmer went home unofficially to do his work, Leverhulme sacked him. A further example of this is the response of a few crofters who were taken to Port Sunlight to see the bright opportunities offered by capitalism. While polite to Leverhulme during their visit on their return they described Port Sunlight as having "nothing but slavery there".

Leverhulme was seeing the world through rose tinted glasses. The fishing off Lewis was not as good as he imagined. The opportunities to grow soft fruits like raspberries for export was limited by the prevailing weather on Lewis. But Leverhulme was a man used to getting his way; nature could be bent by modern technology and economics.

Leverhulme may be portrayed as a kindly philanthropist. But in reality he was a ruthless capitalist. He was also unused to resistance and the refusal of the Islanders to accept his schemes. Their continued occupation of the lands, their anger at his behaviour and their natural cynicism towards landlords frustrated Leverhulme. But so did the British Government, who found Leverhulme's semi-feudal behaviour an embarrassment. As economic crisis arrived and Leverhulmes plans became even more untenable. He gradually withdrew from the islands and the crofters gradually got their way.

Today, Hutchinson tells us, the islands are owned by a myriad of landlords. But there are many memorials to those who occupied land and refused to let the dream die. Their hope that they could obtain "security of their children's children at peace on the soil of thei island" was to a certain extent realised.

This short book is a wonderful piece of history well deserved of its accolades. There is probably no better guide to the history of Lewis and Harris and visitors to the Outer Hebridies could do far worse than read this on their travels. As a record of a unique period of Scottish social history it deserves a wider readership.

Richards - The Highland Clearances
Posted by Resolute Reader at 10:22 am

Leverhulme did make sure I had somewhere to walk the dogs as he gave the people of Bolton Rivington Park but I wouldn't disagree with the characterisation(though he can be both a Philanthropist and a ruthless capitalist).

What I think you have to be careful of us romanticising crofting as a mode of production. It didnt always provides for the needs of the people or bring happiness. Its not something we would encourage to survive under socialism.

Yes, you're right. In bending the stick, I went too far. I think the interesting point though is the sense of the crofters, or the wider Islanders, having some ability to decide their own fate. That was what was missing from Leverhulme's plans and what socialists would uphold.

Of course, under a socialist society, with the whole balance of the economy transformed and the system providing for the needs of the people, rather than the interests of a few, the whole playfield has changed and I am sure that crofters will make very different choices.