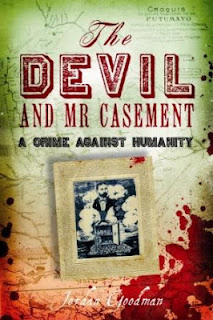 As I was reading this book, which examines the campaign to expose the horrific conditions of slaves working on rubber plantations in Peru during the late nineteenth and early twentieth century, I saw an account of the way that workers in China were labouring in sweatshops to produce rather pathetic toys to sell as souvenirs at the 2012 Olympic games. As Socialist Worker commentated:

"Meanwhile toys of the Olympic mascots Wenlock and Mandeville are made in China by workers who are paid just 24p an hour. And Olympics cleaners sleep in prefab huts, with one shower for 75 people."

The conditions of those indigenous people forced to work extracting rubber from deep in the Peruvian rainforest, collecting it and bringing it to the Peruvian Amazon Company were far worse than 21st century Chinese sweatshops. But there are many similarities, not least in the attitudes of the employers who seem to think workers can be treated in horrific ways in order to turn a profit.

Despite its name the Peruvian Amazon Company was British registered, its directors were almost all upstanding members of the establishment. The company's main Peruvian entrepreneur Julio Arana is the Devil of the books' title. It was he who created an enormous "fiefdom" deep in the Amazon, far from civilisation that could extract vast quantities of rubber from the forest and generate enormous profits. In order to do this he need lots of labour. Workers who knew the forests inside out. In the early 20th century rubber was not yet grown on plantations and indigenous workers were needed who could find and tap the trees.

These workers were subject to the most horrifying violence and torture. British subjects from Barbados were employed to catch those who ran away and guns, whips and rape were all weapons to punish those who did try to escape or failed to bring in the required quantities of rubber. Jordan Goodman notes that in some cases the reward for bringing in rubber was little more than a cardboard belt, or a few trinkets. Young children were made to carry extraordinary amounts of goods on their backs. In London the men of the board of directors never questioned the source of their wealth.

But some did. Recent experience of Belgian rule in the Congo had alerted the British public to the fact that slavery and brutal colonial rule was very much still in existence. A number of newspapers and anti-slavery societies got hold of the story and pressure was brought to bear on the British government to examine allegations that a British company and subjects were involved in slavery. Roger Casement, one of the principle figures of the British diplomatic service involved in exposing events in the Congo was sent to Peru. His report was devastating and after a long, slow period of inaction, the British government eventually found the company guilty of slavery and torture.

Roger Casement, the hero of this tale is a strange character. While the book contains many fascinating individuals, heroic campaigners and principled fighters, Jordan Goodman has rightly concentrated on Casement. Casement came from a fairly well off Irish background. He easily fitted into the British diplomatic corp, but his travels around the world led him to increasingly identify with the oppressed colonial peoples. More and more he found himself linking their oppression with the experience of the Irish. Ultimately, Casement's principles meant that he became a great campaigner for Irish independence and, perhaps naively (he spent several years in Germany) during the First World War, he was part of trying to lead an uprising against British rule. Casement was stripped of his knighthood that he received for helping alert the world to events in the Congo, and executed.

Casement's transformation is fascinating. Goodman quotes him in 1907 arguing that "British rule was to be extended at all costs, because it was the best for everyone under the sun and those who opposed that extension out rightly to be 'smashed'."

Two years later he was writing from Brazil:

"It is not British honour appears to me so much as Congo men and women. British honour, so far as I am concerned, disappeared from our horizon in Ireland more than a century ago".

By the end of his trial in 1916, Casement could conclude about British rule in Ireland:

"If it be treason to fight against such an unnatural fate as this, then I am proud to be a rebel - and shall cling to my rebellion with the last drop of my blood. If there be no right of rebellion against a state of things that no savage tribe would endure without resistance, then I am sure that it is better for men to fight and die without right that to live in such a state of right as this."

The British State could never forgive Casement. But around the world, there were thousands, if not hundreds of thousands who owed their lives to his dogged fight for justice. Despite it's desire to be seen as the country of freedom, liberty and democracy, the British government dragged its heels in getting action over Peru. Casement and a handful of others helped mobilise thousands to pressure them for action and end slavery.

Today, the rotten system that exploits and oppresses people in the name of profit still remains. Indeed, worldwide, millions still labour in appalling conditions, for low pay, in sweatshops and even slavery. The struggles of individuals like Casement to highlight and end this remind us that it doesn't have to be like this. That someone like Casement could come to essential revolutionary conclusions, is an inspiration to all those struggling today against capitalism. This wonderful history deserves to be widely read and the heroes within celebrated.

Jackson - The Thief at the End of the World: Rubber, Empire & the obsessions of Henry Wickham
Galeano - The Open Veins of Latin America
Mann - 1493: How Europe's Discovery of the Americas Revolutionized Trade, Ecology and Life on Earth
Posted by Resolute Reader at 8:25 pm