Early in the 1800s, just after the French Revolution, Benjamin Thompson who was know as Count Rumford created an ingenious experiment to help demonstrate that heat was work. Having noticed that the boring of cannon generated heat;

"he submerged a cannon in water and harnessed two horses to turn the bit. The water go hotter and hotter until after two and a half hours it came to a boil 'merely by the strength of a horse, without either fire, light, combustion, or chemical decomposition."

Important though this experiment was (it helped disabuse the idea that material contained something called "caloric" that was released, creating heat) it isn't one of the ten most beautiful experiments within this book. However George Johnson uses it to illustrate the many stages that science goes through before reaching a moment of scientific breakthrough. In fact, one of the strengths of this book is the way it demonstrates that genius rarely develops in isolation. Scientists, no matter how brilliant, build on the work of others. Even if that work is incorrect it is a useful base on which to build greater understanding. 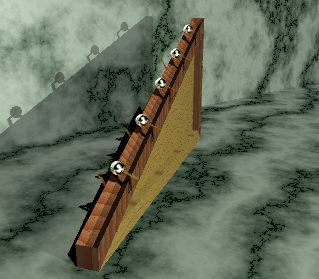 Perhaps the best chapter in this book is the first in which Johnson examines Galileo's work with an inclined plane. This simple experiment allowed the scientist to demonstrate the nature of acceleration. Here Galileo combines flashes of insight with wonderful innovation. In order to measure the rate of acceleration, he came up with bells to ring, mechanisms to pour water and possibly needed the singing of songs. Galileo was building on the work of earlier scientists, but his genius was to do so critically. Pushing aside the accepted science that had been handed down Aristotle, this work of Galileo's was according to Johnson his "strongest claim to greatness... long before his troubles with the Vatican."

Some argue it didn't actually take place but was more of a thought experiment. But in a piece of research almost as brilliant as some of the other examples of science in this book, Johnson describes the work of one Stillman Drake who painstakingly recreated tables of numbers from Galileo's mass of papers to show that the original scientist had indeed repeatedly performed the experiment, scratching out errors and playing with the numbers until he reached his final result.

It is probably a result of the nature of particular science that most of the experiments in here are physics based. Indeed of the two biological chapters, one on William Harvey's work on the heart and blood circulation seems to me to barely qualify as an experiment. The other, Pavlov's work with dog's instinctive behaviour and conditional responses is  a series of extended experiments that build up a case gradually. This chapter is particularly interesting as Pavlov's work is oft quoted but little understood.

Any book of this type is in a sense arbitrary. Who can say what a beautiful experiment is, and why it is more beautiful than another? But there is some interesting stuff here. I am not convinced that the experiments chosen (most of which are from the nineteenth and twentieth century) are more beautiful than modern science. Johnson argues that contemporary work is dominated by work with multiple scientists but I don't think this makes it any less inspiring or exciting. Beautiful experiments don't all have to involve a lone scientist hanging wires from ceilings and bolting brass instruments to tables.

More problematic is Johnson's style. Unfortunately in places brevity leads to confusion. Very occasionally Johnson's descriptions are very unclear. His one paragraph description of Fizeau's experimental calculation of the speed of light left me confused (and I'm university qualified in physics!) and I had to resort to youtube to get an inkling of what he meant.

Still this mildly diverting book will interest those who want to understand the scientific process without feeling they've got to learn too much science. Hopefully it will encourage further reading on some of these topics and possibly stimulate a few future experimenteers.