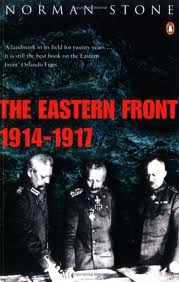 Here in western Europe we are apt to forget that both World Wars took place over a vast expanse of the globe. In particular World War One is often discussed in terms of the great battles at The Somme, Verdun or Passchendaele. Of the numerous books devoted to World War One that I've seen in English almost none of them deal with the enormous conflict that took place on the Eastern Front as Russia clashed with Germany and Austro-Hungary.

Norman Stone's book then is very important as it is one of the few that look in any detail at the events that took place in the east during World War One. However its significance is far more than this, because these events helped shape the one of the great events of modern history, the Russian Revolution.

Stone's history is mostly a military one. In places his detailed reconstruction of events, with explanations of the different movements of regiments, divisions and armies is almost tiresome. For those not versed in military tactics some of the descriptions of the preparations for battle and the engagements themselves will be impossible to follow. Nonetheless there are sections of great fascination and insight.

One of Stone's themes is that the shape of the war, on a macro and micro scale was determined by wider changes taking place within Russia. While I don't think that Stone is close to being a Marxist politically, his understanding of the social and economic tensions within Russian society would be close to some of those on the left who have analysed Russian history.

In analysing why the Revolution took place, Stone writes:

"This economic chaos was frequently ascribed quite simply to backwardness: Russia was not advanced enough to stand the strain of a war... But economic backwardness did not alone make for revolution, as the examples of Romania or Bulgaria showed... The economic chaos came more from a contest between old and new in the Russian economy."

This battle between "old and new" shaped more than the economy. It shaped different attitudes to the way that military production took place - the Tsar wanted production through state factories, but emerging capitalists wanted to make profits. As a result goods cost more and more as profits boomed during wartime. More importantly however, the old and new played out in the military leadership.

As with elsewhere in World War One almost no-one understood in August 1914 the way that the war would play out. Russian commanders as with their counter-parts in the west and the central powers imagined a brief conflict. In fact, in Russia early conflicts were fought much in the way of battles of the 19th century. Stone recounts one engagement between Russian cavalry and their enemy taking place as though the 20th century hadn't happened. The Austro-Hungarian horsemen in this conflict being almost unable to ride as they'd taken their dress saddles in order to look good as they rode. A detachment of infantry broke the sabre duel up with rifle fire and presumably the commanders were dragged kicking and screaming into the 20th century.

The Russian army was beset more than most by backward looking and incompetent military leadership. Many of the generals were Tsarist appointees and even when they failed they were frequently promoted due to friends at court. Their leadership was often further undermined because of personal feuds or communications failure. In one conflict in 1915 the fortress at Libau was evacuated by Russian troops in the face of a German threat. As the Russians left, cutting the telegraph cables, a second Russian army was sent in to defend the base. In the confusion, the Germans occupied.

The chaos described by Stone is not of course limited to Russia. Austro-Hungary in particular had its own share of idiotic and unprepared commanders. The tragedy of course, is that this lack of leadership lead to enormous casualties. When the commanders got it right (in terms of military organisation) they often were younger men, with different ideas and experiences. Interestingly Stone notes that many of the most successful commanders were to take their experiences into the Red Army in 1919 and help Trotsky to defeat the Whites during the Civil War that followed the Revolution.

Much of the blame for failures by the Russian army were put at the feet of the Russian economy. Failed military campaigns were often blamed on the lack of shells for the artillery. Stone argues that this was not the case, and convincingly shows the way that failure was more to do with the inept leadership and bad military organisation. He also argues though, that while "virtually all sectors of the economy grew.... their growth was not even and a series of bottle-necks threw the economy into chaos as it encountered them. The Tsarist regime had little idea as to how such crisis might be surmounted, and in any case they provoked the final crisis of an already badly-strained society."

Stone's book is not without faults. Though some are not of his making. Written in 1975 it suffers from lack of access to the Russian archives and could well do with an update. However, Stone underplays the role of the revolutionary movement in helping to shape the revolutionary movement. His analysis rightly doesn't put the success of the revolutionary solely on the base of military and economic crisis, but he does say that the Bolsheviks had limited support amongst the front-line troops. For him the revolution was more a result of the particular way the crisis played out and the way that Lenin was able to offer hope to the masses of Russian society. But this is contradicted by the example of Germany where a revolutionary situation arose in a similar way, but the lack of mass revolutionary socialist organisations did not lead to the establishment of soviet power.

Stone's book nonetheless is not meant to be a serious examination of the Russian Revolution, but a study of a near forgotten part of World War One. In this it succeeds admirably and socialists will gain much from reading it, as a background to a deeper understanding of the events of 1917.

Tuchman - The Guns of August
Posted by Resolute Reader at 5:29 pm