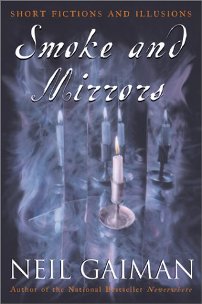 Regular readers of the blog will know that I've recently fallen in love with the novels of Neil Gaiman. I certainly rank American Gods as one of the best works of fantasy I have ever read. Having exhausted Gaiman's novels I recently picked up this collection of short stories and was very interested with how he would handle the genre. Gaiman's novels tend to be large. Their complex characters and story lines needing time to develop. This might mean that short stories wouldn't work so well.

Reviewing collections of short stories is difficult. Its hard enough to mention stories without giving away the tale and a few duff stories in a collection can obscure some real gems. I have to say that the stories in this book are good with some absolute crackers and a couple of stinkers. And too much poetry. However all the stories (with the exception of the poetry) are fun and some are very original indeed. I particularly liked the story of the old lady who finds the Holy Grail in a second-hand shop (a metaphor for where I found the book I suppose). I also liked the story of the troll who waits under a bridge for a boy to return. At different stages of the boys life as he grows older, he finds the troll and bargains for his life.

Several of the stories rely heavily on other authors. Shoggoth's Old Peculiar is the story of an American tourist discovering the lack of joys in English seaside towns. Without giving too much away, fans of HP Lovecraft will get it faster than most. The stories are very English. One of the best is the tale of a English writer sucked into the bizarre world of Hollywood, which has a lovely touching ending. Rather oddly, Gaiman places himself in some of the stories, or at least a character based on him. Some people might find this a bit strange and I didn't really like it. Smoke and Mirrors is probably not the best place to start with if you want to read Neil Gaiman. But if you like the fantasy genre and aren't put off by the short-story format, you'll probably find something in here for you. Though skip the poetry.