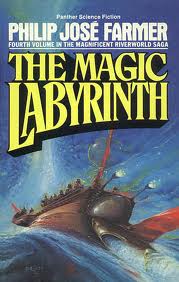 Volume four of Philip José Farmer's Riverworld series begins with a short author's forward, "Now ends the Riverworld series, all loose ends tied together into a sword-resisting Gordian knot, all the human mysteries revealed, the millions of miles of The River and the many years of quests and The Quest completed."

Its a short, neatly worded foreword that is only undermined by the fact that it is entirely a lie. The Magic Labyrinth was clearly intended to be the last in the series tying up the loose ends, but after rambling on for almost five hundred pages, Farmer clearly had no idea how to finish it. It finishes, rather abruptly (and slightly bewilderingly for those of us who had taken the foreword literally) and the reader must get hold of the final volume.

At the centre of the book is a climatic and rather well written battle between two enormous riverboats that have been questing along The River. The Riverworld is a place of resurrection, were every human ever to reach adulthood awakens. On the Riverworld, at least initially, those who die are resurrected elsewhere on the enormous planet. That is until the resurrections fail.

Farmer's heroes are well-known historical figures. Richard Burton with his lover Alice Liddel. Mark Twain and King John of England are just some that make an appearance in this volume. Their quest is very much to find the purpose of the Riverworld. If we are honest, finding out Farmer's explanation for the almighty conundrum is the reason most readers will have stuck with him until book four. Sadly few will be reading this for Farmer's prose (which is stilted) or his philosophical meanderings. His ruminations on the nature of "self" form an important part of the story, but need not have taken up page after page of monologue. Despite the wealth of material he has to work with, Farmer often fails to flesh out his characters and has a tendency to drop them of a cliff at a moments notice for no apparent reason. I am sceptical that the final book in this series will be an improvement (which is a shame as volumes one and two had great promise).

Farmer - To Your Scattered Bodies Go
Farmer - The Fabulous Riverboat
Farmer - The Dark Design
Posted by Resolute Reader at 12:53 pm