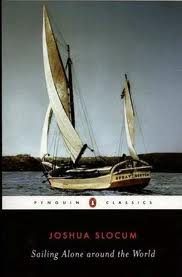 In his introduction to this famous traveller's tale, Arthur Ransome says that "A school library without this book is incomplete. It should be part of the education of every English or American boy". Times, of course, change, and Joshua Slocum's feat is almost forgotten.

There is no doubt though, that he inspired and excited the world when he became the first to sail single handed around the world. The story itself is a somewhat stilted yarn - it's full of descriptions of ropes, sails and wind directions. No doubt, the school boys that Ransome refers to, might have understood it all, but it can be a bit confusing for the land based reader today.

The voyage itself is not only an incredible feat - it also marks the passing of a world that no longer exists. It is a time when sail is being eclipsed by steam, and when foreign ports were as unique as alien planets. Slocum visits some amazing places - the place where Alexander Selkirk (inspiration for Robinson Crusoe) was marooned being one. Slocum claims that Selkirk lived in a particular cave, though recent research doesn't back that up. He also meets the widow of Robert Louis Stevenson who appears to live on an island in the middle of nowhere, and takes her on a sailing trip.

By its very nature, Slocum's story is a long trip, punctuated by brief visits to ports and islands. At many of the places, he is feted by the local establishment, who arrange speaking events and take him on tours. Through this, he funds the further voyage. There are no big name sponsors here. No newspapers or advertising to keep his trip going. Slocum survives from resourcefulness and the kindness of strangers.

There are some odd moments - pirates and robbers occasionally, beaten off by a couple of quick shots, or some tacks scattered on the ship's deck at night. Armchair sailors the world over will enjoy this tale, perhaps mostly from historical interest. Though it may well inspire, it's doubtful that it should be put at the heart of youngster's education today.
Posted by Resolute Reader at 12:19 pm