Éric Vuillard - The Order of the Day 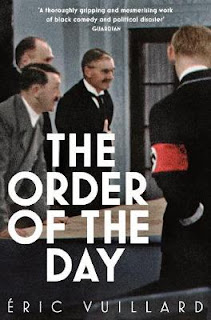 The parallels between the rise of the far-right in Europe in the 1930s and today, with far-right and fascist figures and organisations gaining positions of influence and power across the world, has been noted by many different writers in many different forms. Éric Vuillard's short novel, brilliantly translated from the French by Mark Polizzotti, avoids drawing any too obvious links with the author concluding near the end that "we never fall twice into the same abyss". Rather he allows the reader to draw their own conclusions as he tells the story of how Hitler gained power and was able to annex Austria and Czechoslovakia with barely a murmur of protest from the international community.

The story is told through descriptions of that most of bureaucratic and mundane of events, the meeting. One meeting is that between various senior German industrialists who meet Hitler to discuss supporting him in the crucial election of 1933. There's the meeting between Kurt Schuschnigg and various senior figures in the Hitler government who browbeat Schuschnigg into accepting German entry to Austria and there is the less formal meeting of senior figures in the Chamberlain government as Ribbentrop says farewell to British diplomacy before war breaks out.

Vuillard tells these stories well, with an eye to emphasising details that are seemingly inconsequential but really demonstrate the power of the fascist regime - though he never lets us forget the power and interests that led to Hitler's success. Of the 24 industrialists at that fateful meeting he writes, that they stand "affectless, like twenty-four calculating machines at the gates of Hell."

The story is told well, and is clearly intended as a warning for our times. But I was unsatisfied. This is a history of the rise of Hitler though the eyes of industrialists, bigwigs, politicians and diplomats. There's no sense of the ordinary person, and definitely not a sense that Hitler could have been stopped. What of those who battled the Nazi thugs in the streets? What about those heroic anti-fascists in Vienna that fought to stop the rise of Schuschnigg's predecessors and their austrofascist politics?

"We never fall twice into the same abyss" writes Vuillard. But continues, "but we always fall the say way in a mixture of riducle and dread. We so desperately want not to fall that we grapple for a handhold, screaming". But the lessons of the 1930s are that we don't have to fall. There's no inevitability to our defeat. Our predecessors stopped Moseley in the East End. They stopped the fascists in France in 1934 and they almost stopped them in Germany. That's the lesson we have to cling to. For liberals today, gripped by fear at the rise of the right, we ought to be reminding them that history doesn't automatically repeat. Our side has agency too. Our side can win. That Éric Vuillard's book fails to do this undermines his otherwise powerful reminder from history.
Posted by Resolute Reader at 2:32 pm