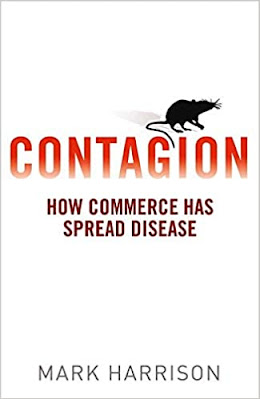 Those people who returned home from coronavirus hotspots during 2020 and entered quarantine for two weeks to hopefully avoid spreading Covid-19 to family, friends, colleagues might have been interested to know that the term 'quarantine' has a long pedigree. It's origins are in 1397 when the Republic of Ragussa (Dubrovnik) allowed for the "detention" of ships for "up to forty days" to prevent the plague spreading into their area.

It's an interesting snippet of information that reminds us that humans have long lived with the threat from disease and have come up with ways to prevent its spread. As civilisation developed humans encountered new diseases and spread existing ones. As trade became an integral part of societies and different, previously isolated groups of people came into contact, diseases travelled on the ships, in the trade goods and crucially, on the humans and animals.

Mark Harrison's book is a history of the close links between commerce and disease. The Covid-19 crisis has shown how modern society, where travel is no longer limited to a few traders or soldiers, has exacerbated the ability of diseases to become pandemics. The speed of airlines has meant that people can arrive at their destinations long before the symptoms become visible. But this isn't new. As caravans gave way to oceanic sailing ships and thence to steam vessels, the same process scared contemporaries.

The awareness of close links between commerce and disease spread aren't new either. In the 14th century people "distrusted" merchants and traders because they associated them with spreading disease, particularly the plague. The Bishop of Rochester, England saw plague in 1375 as being due to traders who each "studies to deceive the next man". Ironically the Bishop had hit upon a key problem that would undermine efforts to stop or contain disease over the coming centuries. The fact that those whose livelihoods depended on moving people and goods would frequently seek to undermine quarantine or restrictions in order to make their money - even at the risk to thousands of lives.

Even in pre-capitalist eras, the interests of commerce whoever weren't just limited to those of individuals, but were bound up with those of nation states. By the 1660s, with the early development of capitalism, the Dutch Republic and England were already engaged in "tit for tat" quarantines designed to undermine each others economies under the guise of protecting health. Officials might lie to prevent "disruption to commerce" as was the case in 1720 when plague arrived in Marseilles, France. Officials at Livorno declared sick men on board a ship bound for the French port as suffering from a fever, not plague. Merchants involved in trade with the Levant were critical of plague restrictions "which cost them dearly through delays, fees and the damage of goods by fumigation".

One of the most fascinating aspects to Harrison's book is how he shows that ideas of how to prevent diseases spreading became ideologically charged. Opposition to quarantine became closely linked to those who promoted free trade, for instance. As Harrison points out:

Politics, commerce and medicine were becoming closely intertwined. In the heady atmosphere of the 1780s and 1790s many reformers - not least medical practitioners - began to portray quarantine as a relic of a less enlightened and brutal age.

Echoes of this reoccur today. Politicians are desperate to reopen economies after lockdowns, or stop quarantines to prevent damage to the travel and holiday industries. Those who were willing to sacrifice lives in 2020 through herd immunity shared a world-view with those who saw quarantine as an obstacle to commerce in the era of the corn laws.

Before 1840 most British politicians and most of the British public did not wish to see the nation's quarantine laws repealed or even significantly relaxed. Despite the gloss of liberalism, those who pressed vigorously for the abolition of quarantine tended to be regarded as exponents of vested interests who were prepared to sacrifice the public's health for selfish gain.... but from the mid-1840s there was a significant change, with opposition to quarantine becoming more respectable and more widespread.

In part this was tied up with discussions about how best to deal with disease and new insights into how diseases spread - especially the peculiarities between different diseases. There was also not a touch of racism to imperial views of the world outside of Europe as being dirty, dangerous and unhygienic, compared to the modern industrial nations. Colonialism, imperialism and racism combined with the drive to make a profit that coloured attitudes to fighting sickness.

In this context the series of international conferences that took place through the 19th and 20th centuries to discuss responses to diseases and try and agree global approaches to disease spread tended to be shaped by what Harrison calls "sanitary imperialism". He contrasts the "theatre for imperial rivalry" at European sanitary conferences with those in Pan-America, where the interests of the US dictated the course of events. It is a process that continues into the 21st century with international agreements about disease often being distorted by the interests of the most powerful nations.

Following the collapse of Communism and the globalisation era, with massive volumes of goods being transported globally and supply chains spanning continents the potential for disease to spread became huge: "Global cities have been linked by a chain of infections ranging from multi-drug-resistant tuberculosis to SARS, while the long-distance trade in animals threatens to spread new strains of influenza and other pathogens capable of crossing between species".

The contradictions are brought out in a useful section about BSE, where Harrison shows how different commercial interests drove nation states into conflict with others about the export of beef. Laws that should have been about protecting citizens for disease because weapons in tit for tat revenge for bans on imports. He also shows how this has the potential to become an issue for working people as in South Korea were a massive wave of protests and strikes were initiated as the President was seen to be soft on US interests and allow potentially dangerous beef into the country.

If Harrison's sections on the diseases of the globalised era - Sars, Bird Flu and so on - seem to downplay the potential for disease, its possibly on because of hindsight from the Covid-19 era. For Harrison the main question is how and when quarantine is most useful in stopping disease. Rightly he argues that decisions cannot be made by those with vested interests, but must be based on collective global governance.

Harrison's book is interesting, though it is a somewhat dry read, packed with detail that often obscures rather than clarifies. One problem I did identify is that Harrison tends to see commerce as being an unchanging thing - essentially the same today as it was in the 14th century. As such he doesn't really explore the way that capitalism has changed our relations to nature and made pandemics more likely. There's only a little on how the concentration of animals in massive feedlots has made outbreaks more likely. Instead the author focuses on the trade and movement of commodities, not the system that produces them.

The problem is that it is the nature of production under capitalism that both undermines attempts to prevent disease spread and encourages the emergence of new diseases through deforestations, industrial agriculture and so on. We need to talk about more than just "commerce". That said, Mark Harrison's book is one of the few that appeared before the Covid-19 pandemic that offers insights into what has taken place and what needs to be done. For those on a "deep dive" into disease reading it should certainly be on the list.

Posted by Resolute Reader at 6:07 pm