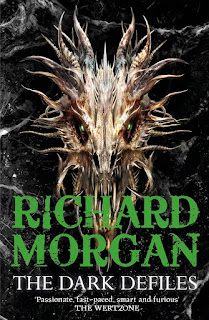 I wanted to love The Dark Defiles. I'd enjoyed the two early volumes in the series and despite some issues with the overly graphic violence and sex, I felt Richard Morgan had created a detailed, believable, working fantasy world. Indeed one of the strengths of the two earlier books was that they never failed to neglect to build an environment of farmers, workers, slaves and "ordinary people" as well as the adventurers, soldiers, rulers and emperors who are the staple of this sort of fiction.

But all this vanishes with the third volume. Defiles seems simply to exist to bring together the strands that hand lose from the earlier books. Thus we effectively have two character arcs which the author almost, but not quite, ties together. Added into this is a growing amount of mumbo-jumbo about the gods and magic that rule the world behind the scenes and a few ancient technological marvels that push forward the stalling plot, and you have a recipe for disappointment.

That said, it's very readable - except when the descriptions of the battle scenes are verging on medical textbook descriptions of the insides of peoples' bodies. But most of the time I had little idea what was going on. I'm still not convinced that one of the central tales of revenge actually has any bearing on the plot at all. Nor do I understand why the heroes had to be catapulted 1000 miles to do it. As with several other of his books I finished this wondering what had actually happened.

Richard Morgan's produced some innovative science fiction and fantasy. Not least in having LGBT characters as the central characters in the story. But this one was a little too "by the numbers" and lacked the passion for world building that the earlier works shared.