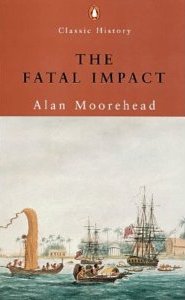 This is a beautifully written book about the terrible legacy of European exploration of the Pacific. Alan Moorehead's classic study of the impact of European arrival in Tahiti, Australia and to a lesser extent the Antarctic is a tale of death, destruction and ecological distortion.

The story begins with Captain Cook, who arrived in Tahiti in 1769. As many books, films and stories since have told, Tahiti was at first glance an island paradise. Certainly for those who had travelled there on Cook's tiny ships, underfed, sick and tired, Tahiti must have been a dream come true. The Tahitians rarely wanted for food - their island was well stocked with a rich variety of fruits, plants and animals. Work was limited and the Tahitians had attitudes to sex that were far from the sailors' morally restricted lives back home. While life there was not utopian, there were inter-tribal wars and ritual sacrifice for instance, this was certainly a far better place to live than the lives the sailors were used to.

Alan Moorehead documents the rapid decline of the island once the Europeans arrived. From the first encounters with Cook's men, the Tahitians, lacking European notions of ownership were want to try and take the amazing objects that they saw for themselves. Guns and parts of the ships would vanish and Cook had to lead a number of punitive exhibitions to retrieve these. On later trips Cook attempted to introduce European animals to the islands, distorting and changing the ecology of Tahiti. Within a few years, the highly embellished tales of the exotic life on the islands attracted more explorers. Tahiti became fashionable, and the opportunities for replenishment of ships meant it also became a pawn in inter-colonial rivalry. Those who suffered the most of course, where the Tahitians. Their isolated lives had left them unable to deal with the arrival of the Europeans. Technologically or militarily they could not compete, nor did their world-view allow them to comprehend what could happen to them. Their isolation also left their bodies unprepared for the arrival of small pox or STDs, and within 50 years of Cook's first arrival, the population had crashed form 40,000 to 9,000.

A similar tale can be told of what happened to the Aboriginal peoples of Australia, when Europeans arrived. Initially, the barren and dry country was not seen as a prime destination. It was only a few decades later, when Britain sought a location of the victims of its over-zealous attitudes towards crime that Australia was considered. The 800 convicts who first arrived in Botany Bay in 1788 found a land badly suited to European notions of farming and society. Many died and many more almost perished. Once again it was the native peoples who suffered; the complexities of their hunter-gather communities over-looked by Europeans unable to see anything other than a childlike simplicity. This reached its extreme with the systematic murder and genocide directed against the people of Tasmania, hunted down like animals by European settlers.

This is a classic book. Historically it is detailed and as a work of literature it reads more like a tragic novel than a piece of academic writing. In places it is somewhat dated, Moorehead's use of language that was considered appropriate in the 1960s would not pass the proofing stage today. But the author's sympathies lie with those whose lives were destroyed by colonialism. Unlike some today, he is no apologist for Empire. His writings, particularly of the lives of the aboriginal people of Australia are fascinating because they uncover the complex nature of their lives, culture, language and customs. This would be a useful place to start for anyone wanting to explore these topics further. For Moorehead there are few happy outcomes from the exploration of the Pacific ocean. Apart from the tragedies that befell the natives of these islands, most of the sailors he mentions meet early deaths, as does Captain Cook himself (though the story is far from the tale of murder at the hands of savages that I learnt as a child).

The Fatal Impact might be considered an early example of the type of history that attempts a more detailed look at the intertwined fates of people, environment and their ecology as representatives of different modes of production meet. The story was repeated in many ways, in many places over the period described here. Its an aspect of history that deserves further study as we continue to consider the impact of our own society on the wider environment.

More on Alan Moorehead's fascinating life and writings can be found here. (PDF file)
Posted by Resolute Reader at 7:10 pm