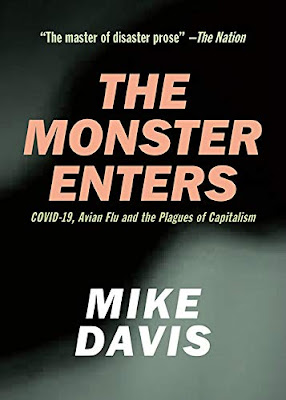 Those of us who read Mike Davis' The Monster at Our Door in 2005 were perhaps more mentally prepared for the Covid-19 pandemic than many others. Some of us however spent the intervening years in a state of anxiety, jumping every time a news report (usually buried in the back pages of the newspapers) mentioned a "new strain" or "disease outbreak" somewhere in the world. Sadly Davis' has been proved right. While Covid-19 is not a strain of avian flu, the parallels are terrifyingly apparent to even the casual observer.

This new, updated, expanded and renamed edition of his book begins with Covid-19. Davis shows how in the aftermath of SARS, Ebola and Avian Flu many scientists and a few politicians drew important conclusions about the need for public health responses that both tried to avert disease and plan for pandemics. Unfortunately Davis also, meticulously, shows how the US government in particular undermined and destroyed the limited preparations that had been made. Rightly Davis eviscerates the Trump regime for its disastrous public health policies, but he shows how this response was rooted in earlier politics that saw public health spending as an unnecessary luxury.

In response to the threatened 2005 avian flu pandemic [Californian] Governor Arnold Schwarzenegger and the Democratic leaders of the legislature spent hundreds of millions of dollars to stockpile 2,400 portable ventilators, 50 million respirators and materials to assemble 21,000 additional hospital beds. They also invested in three state-of-the-art 200-bed mobile hospitals that could be up and running within 72 hours... But Schwarzenegger was succeeded by a notorious penny pincher named Jerry Brown, who in 2011 crossed out the annual allocation of $5.8 million to maintain the stockpile... the strategic supplies... were either given away or sold off.

As I write this California has over 600,000 confirmed cases of Covid-19. No doubt those supplies, even with the differences between avian flu and Covid-19, would have been useful.

But Davis doesn't simply note the horrific mistakes made by governments like Trump's in responding to Covid-19 and failing to heed lessons of the past. He shows how a much more thorough-going solution was needed if further pandemics were to be prevented. Indeed, the central theme of the book was how the neo-liberal driven industrial agricultural model (particularly in SE Asia, but also in Africa, Europe and the Americas) was the driver of disease and pandemics.

What was needed was fundamental change:

Permanent bio-protection against new plagues... would require more than vaccines. It would need the suppression of these 'structures of disease emergence' through revolutionary reforms in agriculture and urban living that not large capitalist or state-capitalist country would ever willingly undertake... As [Rob] Wallace emphasised a few years ago, "the agroeconomic impacts of global neoliberalism are foundational, felt across biocultural organisation, down so far as the virion and molecule.

One of the reasons I've spent the intervening years between first publication of Davis' book and the outbreak of the Covid-19 pandemic in a state of anxiety is the knowledge that there has been no attempt to challenge the 'structures of disease emergence' inherent to industrial agriculture. Indeed, exactly the opposite has happened.

The problem, as Davis ably details, is that challenging these "structures" means challenging powerful corporate interests and the states that rule in their name. Behind the threat of avian flu pandemics lie the massive corporations that produce enormous quantities of chickens through the concentration of millions of birds in factory farming. The media and Trump inspired anti-Chinese feelings imply these are an Asian problem (when they bother to look at the role of industrial farming at all) but the problem of this model of farming is global, and is related to a model that puts profits before people, animals and planet. In fact Davis' analysis of the avian flu crisis shows how corporate power actually made government and medical responses worse as they shifted the blame onto small producers rather than change the massively profitable behaviour of the big factory farms.

Writing about the enormous Bangkok based agricultural corporation Charoen Poklphand which "figures centrally in the story of H5N1's terrifying return in the winter of 2003-4" Davis writes:

CP senior executive Sarasin Viraphol assured reporters that, although the company would not allow the press to inspect its plants, avian flu was completely absent in Thailand. In fact, as the Bangkok press later reported, the government had been colluding with CP and the other giant poultry producers to conceal the epidemic by paying contract farmers with infected flocks to keep quiet; official deceit gave the big exporters several months to process and sell diseased inventory, as well as to disinfect their plants and institute isolation procedures... Small producers... were left alone to bear the brunt of the epidemic's human and economic costs.

While the situation with Covid-19 is different, its clear that similar priorities today have made the situation worse, and once again the poorest are suffering the most. In particular Davis shows how the contemporary model for drug research, through competing, profit orientated drug multinationals, makes finding a cure or vaccine harder and less likely.

While much of the book focuses on the 2000s and the threat from avian flu (Davis points out that this threat hasn't disappeared at all, only got worse) this book is still important reading. In fact those who read it, and were scared back in 2005 ought to re-read it, if only for the brilliant new opening chapter.

As in all his work, Mike Davis writes eloquently and clearly with a sympathy for ordinary people. His implicit call for us to challenge the status quo in order to prevent further pandemics is the biggest lesson we can take from this book. His clear analysis is a tool to help us understand and change a system that has already condemned millions of people to sickness and death in the interests of profit. One monster has entered the door, but further ones lie waiting outside.

Posted by Resolute Reader at 4:00 am