William Dalrymple - The Anarchy: The Relentless Rise of the East India Company 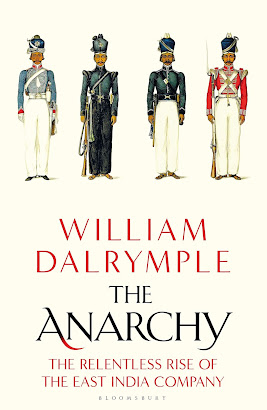 The story of the East India Company is perhaps without parallel in colonial history. The rise of a minor trading company, founded in 1599, to become one of the most powerful and wealthiest forces in the world is fascinating. It is also deeply tragic. As William Dalrymple points out in the introduction to his new history of the EIC, the first Indian word to enter the British lexicon was the Hindustani slang for plunder "loot". The anecdote tells us a great deal about what the EIC did in India. By 1773 the company had become "too big to fail" and was saved by an enormous bailout from the British government. Before that it had made a handful of English individuals enormously wealthy and many politicians, businessmen and royals had a finger in the EIC pie.

The vast scale of wealth was impressive. In 1765 the East India Company's Robert Clive was granted rights to trade in Bengal, as well as raise taxes (which generated between £2 and £3 million annually - £210 to £315 million today). This wealth did not simply line the pockets of the company's shareholders and directors it funded the growth of the EIC's power:

Seizing the many riches of Bengal with its fertile paddy fields and rice surplus, its industrious weavers and rich mineral resources, opened up huge opportunities for the Company and would generate the finance to continue building up the most powerful army in Asia. The vast revenues of Bengal, which had for so long powered the Mughal exchequer, could, Clive knew, make the Company as unassailable as the Mughals had once been - and provide the finance for perhaps, one day, conquering the rest of the country.

Dalrymple documents the clever dealings of the EIC and Clive in particular in building up bases of power among the Indian rulers who could support the Company's interests. As Emperor Shah Alam signed over rights to the EIC, it meant that:

Two hundred and fifty EIC clerks backed by the military force of 20,000 Indian sepoys would now run the finances of India's three richest provinces, effectively ending independent government in Bengal for 200 years. For a stock market-listed company with profit as its main raison d'etre, this was a transformative, revolutionary moment.

Of course people like Clive returned home fabulously wealthy. Powis Castle on the Welsh borders was (and is) crammed to the rafters with glorious objects from India. The castle itself was bought by Robert Clive's eldest son with the millions that his dad made from his positions in India. One contemporary Indian observer Ghulam Hussain Khan contrasted the rule of the Mughals with that of the EIC.

They [The Mughals] bent the whole strength of their genius in securing the happiness of their new subject; nor did they ever abate from their effort, until they had intermarried with the natives and got children and families from them and become naturalised.

have a custom of coming for a number of years and then of going away to pay a visit to their native country, without any of them shewing an inclination to fix themselves in this land. And as they join to that custom another one of theirs, which every one holds as a divine obligation: that of scarping together as much money as they can in this country and carrying these immense sums to the Kingdom of England; so it should not be surprising that these two customs, blended together, should be ever undermining and ruining this country, and should become an eternal bar to it ever flourishing again.

The author might be forgiven for having a rose-tinted memory of Mughal rule - their immense wealth arose from systematic exploitation of the mass of the peasantry and military conquest after all. But the basic difference of the dynamic of rule is true, and there can scarcely be a better description of the way colonialism has destroyed landscapes and economies in the interests of capitalism.

Nor did the capitalists of the EIC care for the people under their rule. During the infamous famine of 1770 Dalrymple describes the disgraceful behaviour of the Company which utterly failed the millions of people starving. Despite massive amounts of cash they failed to supply seed grain or assist the starving. They did, in what Dalrymple calls the "one of the greatest failures of corporate responsbility" enforce taxes collection and even increased taxes by ten percent. At the height of the 1770 Bengal famine, about £100 million (in today's money) was sent back to England by the EIC.

As with Colonial rulers everywhere the Company became adept at playing off different sections of Indian society against each other. They built up rulers (especially ones they'd defeated) and played them off each other. As one statesman, Nana Phadnavis commented, "They know best how to destroy Indian cohesion. They are adept at the art of creating insidious differences and destroying the harmony of any state".

Eventually Company rule became to embarrassing for even the British government who found successive ways of taking over control. But British rule in India in the 19th century was built on the behaviour of the EIC. The Indian Rising of 1857 was the final nail in the coffin. In fact the origins of that mass rising lay in the behaviour of the British in India since the beginnings of the EIC. The callous, ignorant and racist attitude to the Indian people and the systematic stripping of their country of wealth.

Sadly, Dalrymple's book focuses on the rise of the East India Company. As such its decline and fall is described in an all too short epilogue. But in many ways its this period of Indian history that is often neglected by people trying to understand the impact of the British Empire. Dalrymple also gives a detailed account of Mughal history - something rarely acknowledged in British history books.

Understanding precisely how a stock holding company could come to exert such massive state power in India is crucial to understanding what happens in the 19th and 20th century. As the Black Lives Matter movement has shone a light on forgotten Imperial history this is a book that helps explain how the British came to be in India and what they did to the people after they arrived. William Dalrymple's book is based on original Indian and English sources and with every sympathy for those whose lives the EIC destroyed. Brilliantly written, powerful and moving I highly recommend it.

Posted by Resolute Reader at 4:00 pm