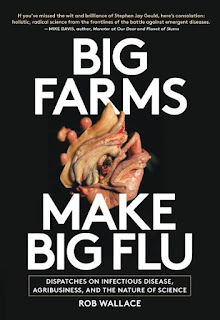 The media is a fickle beast, so coverage of potential epidemics of diseases veers between the apocalyptic to nonexistence. As an outbreak occurs we hear about the potential terrifying consequences of the disease, combined with graphic details of the symptoms and frequently pictures of large numbers of dead animals.

Rob Wallace's new book is an important polemic that argues that we, as a society, should be a lot more concerned about the potential for disease to decimate the human population. It is very much a question of not if, but when. Wallace's work is important because it argues that the key problem is not inadequate science, nor ineffectual medicine (though at times these may be issues) but an approach to the question which fails to see the systematic way that capitalism has transformed our relationship to the wider eco-system in ways that encourage the spread, mutation and virulence of disease.

Firstly, agribusiness, the huge corporations that dominate global farming today encourage disease. They do this in a number of ways. Farming is vertically integrated - from birth to slaughter animals are brought together in enormous numbers, in single locations. This encourages both the spread of disease and its evolution. Frighteningly, Wallace also notes that research shows that the common response to infection among animals, large scale destruction of the flock or herd, helps to select pathogens to be more virulent, or to target younger animals, both increasingly the likelihood of further outbreaks.

But the real problem is an agricultural system based on profit. Take this example of an out-break in Asia,


The CP Group operates joint-venture poultry facilities across China, producing 600 million of China's 2.2 billion chickens annually sold. When an outbreak of bird flu occurred in a  farm operated by the CP Group in the province of Heilongjiang, Japan banned poultry from China. CP factories in Thailand were able to take up the slack and increase of exports to Japan. In short, the CP Group profited from an outbreak of its own making. It suffered no ill effects from its own mistakes.

As Wallace emphasises though, this is not about humans as such, it's about how agriculture is organised.


The onus must be placed on the decisions we humans made to organize them this way. And when we say "we," let'd be clear, we're talking how agribusinesses have organised pigs and poultry.

It's a theme Wallace returns to frequently


What does it mean to change the use value of the creatures we eat? What happens when changing use value turns out poultry into plague carriers? Does out-of-season goose production, for instance, allow influenza strains to avoid season extirpation, typically a natural interruption in the evolution of virulence? Are the resulting profits defensible at such a rapidly accruing cost?

What Wallace is particularly aiming at is a system that reinvents the world's ecology in a manner that makes disease more likely. Farming is his key concern here, as he puts it "the present agricultural model is farming tomorrow's deadliest pathogens alongside its meat monocultures." But it is also the wider transformation of landscape. In a fascinating discussion of Ebola, Wallace challenges those who simply see it as a question of science, but also those who simply see it as a result of poverty. Instead, Ebola is the consequence of the commodification of rural Africa - the transformation of forests in the interests of agriculture, the changing relationships that people have with the wider natural world. Wallace puts it much better than I can


neo-liberalism's structural shifts are no mere background on which the emergency of Ebola takes place. The shifts are the emergency as much as the virus itself. Changes in land use brought about by policy-driven transitions in ownership and production appear to be fundamental contributions to explaining Ebola's area-specific emergence. Deforestation and intensive agriculture may strip out traditional agroforestry's stochastic friction, which typically keeps the virus from lining up enough transmission.

Wallace is not suggesting that we shouldn't spend money on research, or administer drugs or try and alleviate poverty. What he is trying to do is outline method for scientists and government officials to understand the origins of the root cause of the problem. The reality is though that precisely because agriculture is dominated by huge multinationals, Wallace's warnings are likely to be ignored. This is why its good to see he doesn't ignore the struggles of farmers and agricultural workers to improve things and shows that many farmers are well aware of the limitations of industrial farming. Not least because, as he argues, the aspect of animal agriculture that is least profitable is the bit that the corporations are least interested in - the care and maintenance of the animals themselves. It's also the part that is most risky from a disease point of view. Farmers understand this, and they also know that the system is stacked against them as the corporations and banks collude to maximise profits at the expense of livelihoods.

Wallace's book is a detailed and at times difficult read. It originates mostly as articles he has written for his website Farming Pathogens and hence contains a lot of scientific terms and concepts, some of which were incomprehensible to the interested lay-reader and most of which received little explanation. Because the book originates in essays and talks given elsewhere there is some repetition, but I felt what was missing most was a concluding chapter that summarised the author's arguments and offered a clear strategy aimed at the lay-person. That said, for readers interested in capitalism, ecology and wider environmental questions there is much to be gained from this fascinating, if terrifying book.

Quammen - Ebola
Davis - The Monster at our Door
Ziegler - The Black Death
Zinsser - Rats, Lice and History
Posted by Resolute Reader at 9:06 pm