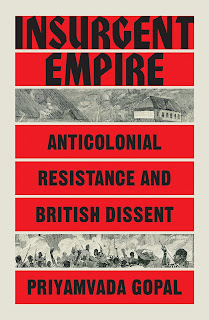 One of the consequences of the reemergence of the Black Lives Matter movement in 2020 was a renewed discussion about the nature and legacy of the British Empire. The toppling and then symbolic drowning of a statue of the slave trader Edward Coulson in Bristol became emblematic of this when anti-racist protesters quite literately pushed a critique of empire into public discourse.

Priyamvada Gopal's book is a wonderful contribution to this process and ought to be widely read among those seeking to understand the British Empire and what it meant for the modern world. Among right-wing commentators (and many of those who were upset by the destruction of Coulson's statue, there is a a belief that empire was essentially a benevolent institution that developed the infrastructure and institutions of the colonised countries, lifting them to up nearer to that of the "civilised", "democratic" European west.

Gopal's book shows how many people who saw empire through a similar lens to this latter position had their views transformed by the active resistance of people in colonised nations to the empire. So this is not a book that gives a people's history of empire. Rather its one that takes specific moments of revolt in Imperial history and shows how they transformed the political terrain in Britain. Often this led to far-reaching transformations in how people conceived of the world they lived in. The Morant Bay rebellion in Jamaica in October 1865 for instance, arose not simply out of colonial brutality, but the reality of colonial rule itself, where the plantation owners, believed "the main problem affecting Jamaica was the lack of steady black plantation labour". But this


refused to acknowledge the widespread desire among freed slaves and their descendants to control their own economic destiny through farming smallholdings rather than be shackled to low-wage labour on terms laid out by the planters. What emerged, therefore, was a stark ideological clash about what freedom meant. One view, touted by the planters and endorsed by the colonial government, insisted that freedom consisted of the 'option' of selling labour to a capitalist entity for prices determined by the latter. The other refused anything resembling the contractual and compulsory extraction of labour in favour of controlling the output of a smallholding.

Resistance and rebellion raised wider issues than simply oppressive social and political relations. They opened up debates about the very nature of society and for some of those watching from Britain, they raised questions about the type of society they wanted too. Some of these figures are fascinating in themselves. The British diplomat, writer and poet Wilfrid Blunt was in Cairo in the run up to the British suppression of the Urabi Rebellion. Blunt was close to Urabi himself and became a go-between, albeit one whose sympathies lay increasingly with the Egyptian people. Blunt's engagement with Arabic people, their culture and religion opened him up to a very different world-view, which meant that when "the occupation of Egypt inaugurated the modern phase of British high imperialism - the infamous 'scramble for Africa'" he became a key figure in a "chorus of dissent from within Britain". Blunt, alongside other British liberals "found their assumptions and ideals challenged, complicated and reshaped by witnessing anti colonial rebellion and engaging with Egyptians involved in it".

All of these examples used by Gopal bear out this process. From Morant Bay and Egypt to the Indian Rebellion of 1857 and so on, we see how the voices and actions of rebellion led to the transformation of ideas for activists in Britain. In turn this helped fuel anti-colonial movements in the heart of the empire itself.

It would be wrong (and dangerous) however to interpret this as examples of white radicals becoming aware of social reality and then becoming the sole agents of change. Indeed Gopal shows that there was often a dialectical process between the social movements in the colonies and British thinkers and activists. But she also emphasises the role of black activists, thinkers and academics in being the agents of new ways of thinking about empire and colonial rule. For example, the London Manifesto that came out of the second Pan-African Congress in 1921, led by W.E.B du Bois, raised complex questions that still resonate today. Gopal explains:


The London Manifesto made visible a fault-line that would haunt metropolitan anti-colonialism and debates on the left over the next decades. In the execution of capitalist crime, where the project of empire was inextricable from the project of capital, could it be that white labour is 'particeps criminis with white capital'? The authors and endorsers of the manifesto were not claiming that white labour was not exploited... They also refuse to claim 'perfectness of our own', assigning black people responsibility for what the text calls 'failure to advance'. Instead, it places a more challenging question on the table: how could and show white labour assess its role in the project of imperialism given the extent to which, both consciously and unconsciously... it had been 'cajoled and flattered into imperialistic schemes.

The Manifesto, Gopal says, "put forward a difficult proposition. The problem of labour versus capital would not be solved in England... as long as a parallel dynamic 'marked the relations of the whiter and darker peoples'."

Black radical thinkers and wider events such as the Russian Revolution would shape new ideas in anti-colonial thought and practice. The London based International African Service Bureau, founded by figures including George Padmore, CLR James in 1937 would take existing anti-imperialist ideas and radically develop them. Gopal explains:


Rather than just 'translating' communist categories into 'the idiom of Pan-Africanism', the task at hand was one of creating a new language that did not repudiate other vocabularies of critique, but sought to bring them in more strenuous engagement with each other. Out of this would emerge a revitalised collaborative anticolonialism. The collective work of the IASB pointed towards Africa as n the West Indies as 'co-producers' of modernity, black intellectuals not just being influenced by European thought, but producing knowledge of the world.

Reading this in 2020 as Black Lives Matter has exploded onto the streets and forced politicians and institutions globally to address questions of historical legacy, racism and Imperialism today, I was struck by how relevant these debates felt. Gopal's book is much more than a catalogue of imperial crimes, it is an insight into the way that anti-colonial rebellion has thrown up individuals and ideas that challenge existing worldviews and forces new ways of looking at society on even distant observers. Today that process continues with debates around the politics, language and practice of the anti-racist movement. But, as Gopal concludes, studying this history, "enables Britons to lay claim to a different, more challenging history, and yet one that is more suited to a heterogeneous society which can draw on multiple historical and cultural resources."

Priyamvada Gopal's Insurgent Empire is a key text for those activists trying to understand the nature of the racist capitalist society we live in, and develop strategies and ideas to transform it. I highly recommend it.

Anderson - Marx at the Margins: On Nationalism, Ethnicity & Non-Western Societies
Høgsbjerg - Chris Braithwaite: Mariner, Renegade & Castaway
Gott - Britain's Empire: Resistance, Repression and Revolt
Newsinger - The Blood Never Dried: A People's History of the British Empire
Wagner - Amritsar 1919: An Empire of Fear & the Making of a Massacre
Ward - Our Bones Are Scattered: The Cawnpore Massacres & the Indian Mutiny of 1857
Posted by Resolute Reader at 6:13 pm