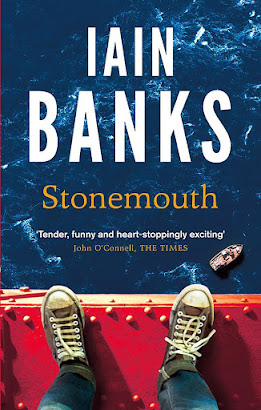 Stewart Gilmour returns to Stonemouth, a small town in Aberdeenshire. Its almost seven years since he's been there. The last time he saw the place he was hiding in the back of a freight train fleeing the town's main gangsters. Now he has returned for the funeral of Joe Murston, an old man who he befriended there, the patriach of the Murston gangster dynasty. Gilmour isn't a gangster himself, his first mistake was to fall in love with Ellie Murston, the beautiful eldest daughter of the dynasty. His second mistake was getting caught having sex with someone who was not Ellie a few week's before Gilmour was to be wedded to Ellie and, by default, the rest of the Murston clan.

Gilmour's first act on arrival back in Stonemouth is to make a very deferential visit to the man who would have been his father in law, and one of the most violent people in the town. But visiting Stonemouth takes Gilmour back into his memories. The story flits between the present and his own recollections of growing up in a place where hard-drinking, unemployment, drugs and violence were common. Eventually Gilmour expects to meet Ellie, and perhaps give her and apology. But there are Murston's who will do everything to stop that and protect their honour, even if that's not what Ellie herself wants.

Taking place over a long weekend the book packs a lot into a short space. It's remarkably tense. Not knowing what it was that led to Gilmour heading south as fast as the railway could take it, meant that there is an air of doom over the whole first half of the book. It wasn't easy reading, not helped by the hint of violence that also hangs over the book. An enjoyable read, the problem was that Gilmour behaves utterly stupidly throughout the whole thing. To me it seems utterly ridiculous that he would go to the town, parade himself around (even with the Murston seal of approval on the whole event) and get out of his head of drugs and drink. He invites retaliation and seems surprised when it appears.

The ending too seemed a little fantastical - a little bit too much wish fulfilment as Gilmour gets his true love back. Ellie is the most one-dimensional of the characters, though she is the one who I sympathised most with. She's the one most trapped by the gangsters that she was born among. As a entertaining story it was certainly readable. As an exploration of how we look back on our youthful mistakes and wish things different it felt too unreal, contrived and its main character particularly stupid.

This was, sadly, Iain Bank's last novel. It's stronger than many of his others, but not his best. But his talent shines through in his writing, if the plot is a little bit messy.

Posted by Resolute Reader at 4:40 pm