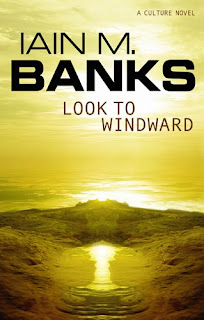 Re-reading some of Iain Banks' works I'm constantly reminded how much we have lost with his untimely death. His science fiction, and Look to Windward is a beautiful example, is full of experiment. Banks' loves playing around with his imagination. Everything, from sexuality and language, is up for grabs.

By setting the bulk of his stories in a society that has left the inequality and oppression of capitalism far behind, and replaced it with the joyous utopia that results from a society (the Culture) were resources are managed in the interests of all, Banks' is free to explore what things might be like. In Look to Windward Banks' even imagines the boredom of those living in a society without exploitation, conflict, poverty and oppression. What do you do, if you can do anything?

There's a lovely example of this mental experiment in Look to Windward. One eccentric individual galvanizes thousands of others to build a massive complex of pylons linked by cable-cars. There's no reason for this, though it provokes a mass movement of people in favour and against, until, well, things move on. The remaining pylons simply sit there, and decay. While life continues elsewhere.

That said, most of this novel is not about utopian life in the Culture. It's actually about those societies around the Culture, and how they interact and react to their enormously powerful neighbour. Here, as in many of Banks' writings, the shady dealings of the Culture form a key plot line. Their manipulative attempts to shape other societies; bringing them into line with The Culture's norms are, at least in the short term, unethical. And in the case of the Chelgrian this unethical interference led to a brutal civil war and millions of casualties. Revenge is in the air, and a faction in the Chelgrian's leadership put in place a mission designed to get past the Culture's unfathonable technological powers.

Its a great story. What makes the book brilliant, as opposed to simply great, is how the Culture seems to others. Its allies enjoy its benevolance and the limitless supplies of wealth and entertainment that it offers. Its enemies see it as a poisoned, corrupted, unhealthy place whose citizens grow fat and lazy on over-indulgence. Banks' plays around with the problems inherent in understanding societies based on norms very different from your own. How backward ancient Rome seems to us today, how difficult to imagine a socialist society run by the "associated producers"?

Banks' dedicates this book to the "Gulf War Veterans". New readers may well wonder at this, as the book came out before Afghanistan and Iraq were turned into the death-traps that George Bush and Tony Blair made. But Banks' point - that intervention elsewhere is never as straightforward as the politicians make out - was only reinforced by later events.

A great talent and a very great loss indeed...