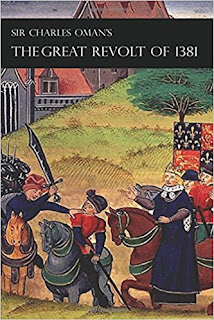 Charles Oman's book is an important historical milestone. It was one of the first historical works to treat the English Peasants Rebellion of 1381 through a modern historical approach. Originally published in 1906 it builds on the historical research of poll tax records by the academic Andre Reville who died very young before he could finish his own work on 1381.

Oman's book is a fairly decent historical overview of what was then known about the rebellion. It has, of course, been surpassed since then by more contemporary work. But many more recent books have been heavily indebted to Oman's work and it is worth reading on that basis.

Oman is in no way sympathetic to the rebels, in fact when discussing events in Scarborough when "at least 500 men" led by Robert Galoun, William Marche and Robert Hunter made "a systematic attack on all against whom they had old quarrels, or wishes to pick new ones" he argues that despite escaping the death penalty, the three men "richly deserved" it. That said, the greatest strength of Oman's work is that he puts the rebellion in the context of the poverty, oppression and high exploitation of the feudal period.


All over England we may trace, in the third quarter of the fourteenth century, local disputes in which one or other of the rural grievances came to the front. The only thing that was new in 1381 was that the troubles were not confined to individual manors, but suddenly spread over half the realm. It is dangerous to conclude, as some writers have done, that this simultaneous action was due to deliberate organisation. We have no proof that there was any central committee of malcontents who chose their time and then issued orders for the rising. The leaders who emerged in each region seem to have been the creatures of the moment, selected almost at hazard for their audacity or their ready eloquence.

Oman's certainty on the lack of political organisation behind the rising ought to have been heeded by others who followed his lead on this subject. But Oman is on less sure ground when he applies a crude economistic analysis to the growth of trade and manufacturing in the 14th century. He writes,


A new industrial proletariate [sic] was in process of formation, and was striving hard against the conditions which it found existing... the growing industrial activity of England, and the multiplication of wealth, was tending to create a class of great employers of labour, and a class of artisans who could never aspire to become masters.

The book finishes by arguing that while the events of 1381 failed to transform England's rural economy:


We may well believe that many landlords were taught caution by the events of June 1391, and that they conducted the rural machine with comparative moderation for the future, lest another outburst of discontent should ensue. But there can be no doubt that the old system went on; it had received a rude sock, but had not been completely put out of gear. The best proof of this is that for the next ten years the archives of England are full of instances of conflict between landlord and tenant precisely similar;ar tp those which had been so rife in the years immediately preceding the rebellion.

But eventually, "villeinage died out from natural causes and by slow degrees". In this I think Oman neglects that the very processes that drove the peasants to rebellion were in fact making villeinage outdated. The withering away was not simply about gradual economic changes, but because it could no longer be made to work effectively.

Oman's book is an important read. It is a good supplement to other books, such as Juliet Barker's excellent England Arise! It also has Charles Oman's own translation of the Anonimal Chronicle, and a series of interesting examples of poll tax rolls. Disappointingly the "report of the sheriffs and jurors of London" on the events of June 1381 are published untranslated in their original Latin.

Barker - England Arise! The People, The King and the Great Revolt of 1381
O'Brien - When Adam Delved and Eve Span
Lindsay & Groves - The Peasant's Revolt of 1381
Hilton - Bond Men Made Free
Basdeo - The Life and Legend of a Rebel Leader: Wat Tyler
Posted by Resolute Reader at 8:15 pm