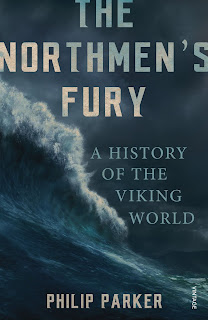 Say the word "Viking" and most people in Britain will immediately think of raids. murder and pillaging, and possibly, remembering back to their school history lessons, 1066. To be honest, for a few hundred years after around 800 CE that was pretty much what most people who lived in Northern Europe would have thought too, before they ran for the hills. Picking up Philip Parker's book before a recent trip to Denmark I was looking to find out a bit more than the superficial depiction of the Vikings as raiders and explorers.

The vikings burst onto the scene with their raid on the abbey at Lindisfarne in North Eastern England. But this is a particularly English understanding, because the Vikings had clearly been around much longer. But rapidly, viking influence grew and by the ninth century covered almost all of Scandinavia, large parts of the British Isles, bits of Ireland, Iceland and the Baltic coast. By the time of peak Viking expansion they had spread into Russia, reached Constantinople, and were semi permanently in parts of the Mediterranean. They had also reached Greenland and the Americas - trying to maintain and create mini-versions of Viking society back in Scandinavia.

It's a phenomenal expansion, and understanding how it happened ought to be a core part of any history of the Vikings. So I was disappointed to find that Parker's book didn't really get to the heart of an explanation. His account focused very much on the raids and colonies, but often became little more than a list of kings and battles. Any historian of the period will be limited by the material available and Parker uses the material there is well - but this tends to focus on kings and battles. But I would have liked a little more on the organisation of viking societies, the economic base of their economy (in particular I felt their agriculture was neglected) and social relations. It was notable that most of the book was about viking men - and women tended to just have roles as wives (or occasionally fighters).

The most interesting bits of the book were the accounts of exploratory missions and the far flung settlements in Greenland, the Americas and Asia. These were incredible voyages and involved masterful pieces of navigation and combat. In particular I learnt that the Viking presence in Vinland (probably Newfoundland) was much bigger than I had previously understood. They clearly also visited for supplies (especially firewood) extremely regularly from Iceland and Greenland.

So I did get a lot out of the book, but I was left unsatisfied by it and would have liked much more on the functioning of viking society, which would help illuminate the reasons behind the raiding; as well as the decline of viking society - for instance, an deeper engagement with those, like Jared Diamond, who argues that the end of the Vikings in Greenland was singularly due to their failure to adapt to the local environment.

Rodger - The Safeguard of the Sea: A Naval History of Britain, 660-1649
Diamond - Collapse; How Societies Choose to Fail or Survive
McAnany & Yoffee - Questioning Collapse: Human Resilience, Ecological Vulnerability, and the Aftermath of Empire
Gaiman - Norse Mythology
Posted by Resolute Reader at 9:03 pm