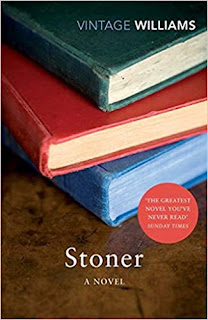 I often devour novels, rushing to find out the ending as quickly as possible. John Williams' Stoner defies this because it gives you the ending on the very first page. The protagonist, William Stoner, dies and this is the story of his undistinguished life. Little noticed at his death, and un-lamented among his family, his name is quickly forgotten. But what Williams shows is that every life, however undistinguished, is one of high-drama - the sort of drama that every human being has as a result of their social networks - their partners, children, colleagues and friends - which is unimportant to most of the rest of humanity, yet is part and parcel of the network of our lives.

Stoner's parents are struggling farmers and manage to send him to agricultural college in the early 20th century. At college he discovers the wonders of English literature and ends up making a career in the university he enters as a young man. He never leaves the town, instead his exploration of the world is through literature. His marriage to Edith is an almost instant failure, marked only by the briefest weeks of passion when she determines to get pregnant.

To the modern reader there is more than the hint of mental health in Edith's life - a situation that is completely unsolvable given the circumstances of 1930s America. Instead the couple muddle along, Edith isolating her and playing games against Stoner, who tries to carry on his career and bring up the daughter he dotes upon. 1930s mores impinge again when Stoner embarks on a beautiful and passionate affair with a young student. The school authorities make it clear that this is unacceptable and she's driven out of the college.

Most reviewers discuss the book in the context of two aspects - the "campus novel" that frames the whole book - Stoner's career and his battles with bureaucracy and his management and it's celebration of literature, explored through William's discovery of books and poetry and his life immersed in the subject. These are absolutely central to the book, but for me this novel was really about alienation - the way that our lives are atomised and decoupled from wider society. Stoner's life is dramatic, but it's isolated and individualised - notably he doesn't serve in either War. His own greatest achievement - the book he authors, and reaches for on his deathbed - is almost completely forgotten by everyone in academia. Yet Stoner is no failure, his personal struggles are ones that he is happy to have made and he can pass away convinced that his life was worthwhile and satisfactory. In writing Stoner's life, John Williams teaches us the importance of every individual within the context of wider society - though he reminds us that society, certainly as it is organised today, doesn't see this importance at all.

It's a beautiful book, neglected during William's own lifetime, and thankfully having had a massive rediscovery since its republication in the 2000s it deserves continued readership. It's likely one of the most poignant I've ever read and I highly recommend it.
Posted by Resolute Reader at 5:15 pm