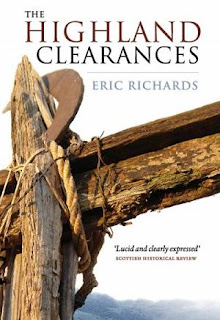 The Highland Clearances were one of many blots of the development of the modern world. The story of the way that the Highlander crofters were forced from their land is well know. Over a period of around a century, though clearances did occur earlier, tens of thousands of some of the poorest people in Scotland were made to leave the lands that they, and their families had farmed for generations. Often their homes were destroyed in front of their eyes. In at least one case, the buildings were torched while a family member was still inside.

The people were being cleared to make way for animals, cattle initially, then the extraordinarily profitable sheep and finally, in many cases deer. Scotland itself was transformed by the process, not just through the depopulation, but also her landscape became much more one of open "sheep walks", and less of farmed land. The people had many destinations. Some were shoved aside, onto progressively less and less arable land, till they lived off the worst that their landowner had. Others were driven towards new industries, particularly the kelp and fishing industries. Still more found themselves heading towards the major cities of Scotland, reliant on charity if the economic moment was not right and they weren't needed in the factories. Finally, many thousands ended up making a journey into the unknown, ending up in Britain's colonies, forming a wave of settlers who themselves, in turn, often took part in clearing the foreign landscape anew. Despite what the propaganda said at the time, the journeys to the new world's were seldom pleasant and life was harsh.

Eric Richards' has written a comprehensive account of the clearances. He very much sites them in the changing economic circumstances of the 18th and 19th century. A time when the old landowners were no longer able pay their debts from the rents they could charge their tenants. A time when increasingly cash crops were offering huge profits in the run up to, and during the Napoleonic Wars. Some of these landlords, whose origins lay in the old clan system clearly believed that improvements to their lands were in a collective interest. The introduction of sheep would produce wealth that would benefit all. Those conservative crofters only had to accept in the inevitability of change and take up new opportunities or positions and they too would feel the benefit.

This is an older version of the "trickle down" argument, that everyone would benefit. It was certainly not true in the Highlands, though as with today, "economic improvement" often brings wealth to a tiny minority. Richards makes much of the economic contradictions that plagued the landowners, indeed he spends some time demonstrating that a number of them did much to help the poor on their land. Some landowners invested large amounts in trying to create industrial opportunities for the poor farmers, though how many were to make the transition from subsistence farming to fishing was not something thought through by these wealthy individuals. Presumably work was just work to them. Other landowners offered enormous amounts in payments to encourage emigration. Sometimes these were not honoured and people arrived in Canada lacking clothes and food, never mind hope. The reality is, that such wealth was designed to get rid of the problem, by pushing the poorest away, so the land owners could continue to invest in sheep and earn their profits.

The process was by no means inevitable. Resistance was frequent and fierce, though it barely graces the history books. Mobs would often try and prevent evictions, officers of the law and less legal hard men were fought and stoned. On occasion their papers were burnt and they were themselves evicted naked from the villages. A general uprising in 1792, led to hundreds of crofters gathering up to 10,000 sheep and herding them miles away from their lands. Later on resistance did force the evictions to be cancelled and clearances to stop. The crofters had limited economic power themselves, but increasingly they did have the support of public opinion. The sight of the poor and the old being thrown of their lands did not sit well with the new socially aware Victorian society, and the Highland question eventually led to limited parliamentary reforms to protect some tenancies. Interestingly, out of the struggle against clearances, the first radical MPs were elected to help bring the Crofters Law to pass.

Richards has produced a readable and detailed history of the clearances. But it left me unsatisfied. I felt he concentrated too much on the economic argument. Like many he seems to see the Clearances themselves as a tragic, but inevitable part of the progress to a more modern world. Like the enclosures, or the displacement of those in the way of new canals and railway lines, the suffering was immense, but in the long term almost necessary for the greater economic development. That's not to say Richards has no sympathy with those whose lives were destroyed. He writes with passion and empathy for them, and by rescuing their struggles for justice from forgotten history, he shows he believes in the justice of their cause.

So was their an alternative. In some senses this is idle speculation, after all the crofters were isolated and politically inexperienced. Though had their struggles linked up with the wider, growing movements for justice elsewhere in Britain, they may have stood a chance. Its notable that the later victories of the Crofters linked in with a growing sense of the need to protect people from the excesses of industrial capitalism. Like all too many historians, Richards makes one mistake. He cannot break from the logic of private ownership of the land - if there was an alternative, it was the destruction of the landowning class, or at least their acceptance that the Highland people had the right to do what they saw fit.

Richards' book is however worth reading. The Highland Clearances are but one part of a tragic story of the development of capitalism. Richards points out that at the beginning of this millennium, 14% of Scotland was owned by just 21 nobles. The fact that we haven't yet broken from the logic of small number of people owning vast acres of land is reason enough to remember the crofters and the way at the forces of one of the world's most powerful states were directed against them.