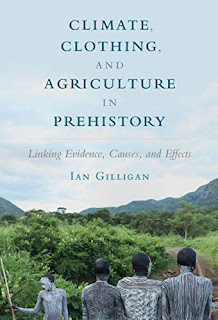 Precisely why humans made the transition to agriculture from their historic hunter-gatherer and forager modes of production is a discussion that is endlessly varied and fascinating, if frequently unsatisfying. So it is refreshing to read a genuinely new and incisive incursion into the debate by Ian Gilligan an academic at Sydney University whose specialism is the study of clothing in historical contexts. Gilligan's book focuses on clothing, but covers diverse ground - from the extinction of the Neanderthals, to the way pre-historic tools were used to make clothing, as well as the evolution of early agriculture.

Gilligan's argument is that the development of clothing in pre-history was a key, unrecognised, part of shaping the transition to agriculture. He also shows how the world's climate historically proved central to this. It is rather obvious that colder climates would encourage inhabitants to cover themselves to gain warmth. But the point that Gilligan makes is that the need to wear clothing is driven by a changing climate, which then has wider consequences. He shows how, through history, different groups of people have responded to the need for clothing, beginning with an overview of the science of clothing and precisely how they warm us. This might seem esoteric, but it allows us to gain deeper understandings of how people acted in particularly historical circumstances. For instance, the earliest covering (simple clothing) is simply a fur or skin draped over the body - a cloak for instance.  But this only gives a certain level of protection. Complex clothing requires more complex tools, and also, Gilligan suggests, further human development:


We also lack any indication that complex clothing was invented before our own species appeared... In the northern hemisphere, early hominins appear to have contracted south-wards during the ice ages... despite the fact that these environments were often quite well-stocked with food resources... By implication, clothing was restricted to simple clothing... and indeed we find an absence of the requisite technologies: we find plenty of scrapers, but few blades and no needles.


Later hominins were able to develop clothing into much more complex arrangements - encasing limbs and so on, and using multiple layers to protect themselves, and presumably exploit resources of colder climates. History however doesn't progress in a series of steps forward. Intriguingly Gilligan points out that clothing was frequently abandoned when no longer required as people preferred being naked. But


at the end of the last ice age: some people were wearing complex cloths. Whereas simple loose clothing does not present such a problem with humidity and perspiration, the full enclosure created by complex clothing prevents moisture from escaping very easily. For those people who wanted to keep on wearing cloth, one option was to change back to simple garments. But dropping clothes altogether was no longer an option, for a couple of reasons - including modesty.

Gilligan can only provide scanty evidence for this transition "from shivering to shame". But there may be some truth in it and there certainly appears to have been a change in terms of materials at this point in pre-history. Gilligan describes the "textile revolution" as humanity moved towards woven clothing at the end of the ice-age which solved the problem of moisture. From this point onward we begin to see direct evidence of clothing in the fossil record and some of these are fascinating.

Gilligan argues that the demands of these new clothing would have been an important imperative towards the transition to agriculture. It is commonly thought that people starting farming because it produced more food. But the reality is different - agriculture can actually have the opposite effect through reducing food to a small number of crops and leaving communities reliant on farming success. It also requires a lot more hard work and many historic societies (and even relatively contemporary communities of hunter-gatherers) resisted the transition on the basis of the amount of labour.

Gilligan shows how much of what we know about early agriculture and animal/plant domestication provides evidence for at least being driven by the need to provide material as opposed to simply food. In many cases (eg rearing of animals) food might have been a happy by-product, or a secondary reason. I think Gilligan makes a compelling case. Not least because today people frequently forget or ignore the way that agriculture was (and is) integral to producing material as well as food.

I was less convinced by his argument that a further by-product of the adoption of clothing was to drive a psychological sense of "enclosure". As he writes:


In the broadest sense, agriculture is a likely development among people who are enclosed psychologically by clothes and whose worldview reflects their enclosure. In relation to ethnography this means that agriculture will have no great appeal to people who remain naked.


Since Gilligan has spent the majority of the book showing how the transition to agriculture arises in part out of a need to solve an environmental issue this feels more like shoehorning a psychological answer into a debate that is essentially about the economics (in a broad sense) of early prehistory. It also neglects some examples of how foraging communities did develop early forms of agriculture - eg the planting of seeds which they returned to later in the year. Such communities were likely, on Gilligan's evidence, to be naked.

This criticism aside, Gilligan's book is a really interesting read. It's aimed at the general reader and is very accessible. I was disappointed with some of the images which looked fascinating but where hard to interpret as they are reproduced very small. But this shouldn't detract interested parties from reading a book that covers a huge amount of ground in debating a crucial aspect of human history.

Bellwood - First Farmers: The Origins of Agricultural Societies
Flannery & Marcus: The Creation of Inequality: How Our Prehistoric Ancestors Set the Stage for Monarchy, Slavery and Empire
Anthony - The Horse, The Wheel and Language
Reynolds - Ancient Farming

Pryor - Farmers in Prehistoric Britain
Posted by Resolute Reader at 11:15 am