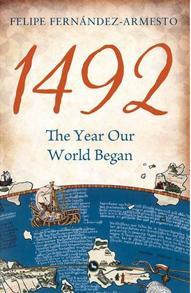 The arrival of Columbus in the New World in 1492 is often seen as the date which changed history. But had  it been possible to have some sort of global over-view in the later half of the 15th century, few people would have bet that the rather uncouth, unlucky and insignificant admiral would have been the first to discover the Americas. Indeed, few would have put any money on the Spanish state doing it, or even anyone in Europe. Back in the 1490s, as this fascinating history shows, Europe was an economic, technological and scientific backwater compared to some parts of the world.

The years around 1492 had a whole series of "turning points" for world history and this overview of them demonstrates that the world may well have turned out remarkably different. It is also a useful book to demonstrate that European superiority has few historical roots, and violent conquest was the chief mechanism that made sure that Europeans dominated world politics for the next few centuries.

So this book covers some fascinating history. The period marks the expulsion of the Jews from Spain, that helped transform a whole number of countries. The point when Russia stopped being a group of fractious states and headed off down the road of becoming an Empire. A period when a whole series of sub-Saharan countries were at the peak of their prosperity and influence.

The country that seemed most likely to dominate the future world back in 1492 was China. Her wealth was internationally famed. Travellers and traders did their best to get there and Europe found herself marginalised by local trade in the Indian Ocean. These "seas of milk and butter" linked the world's richest economies but were self contained, forcing European traders to either travel around Africa or find new ports.

China's explorers should have reached America first. Admiral He had made a number of voyages around the Indian ocean, creating Chinese trading sites and bringing embassies. He also brought back giraffes and other strange animals for the Chinese nobility to gawp at. Fernández-Armesto comments that:

"An age of expansion did begin, but the phenomenon was of an expanding world not, as some historians say, of European expansion. The world did not simply wait for European outreach to transform it as if touched by a magic wand. Other societies were already working magic of their own, turning states into empires and cultures into civilisations. Some of the most dynamic and rapidly expanding societies of the fifteenth century were in the Americas, south-west and northern Asia and sub-Saharan Africa. Indeed, in terms of territorial expansion and military effectiveness... some African and American empires outclassed any state in western Europe."

But Europe did come out on top. Not because of inherent genius or superiority, but because other countries did not turn outwards, or turned in on themselves or succumbed to invasion, war or collapse. China recalled its enormous ships and never found the Americas. But because Europe did;

"The incorporation of the Americas - the resources, the opportunities - would turn Europe from a poor and marginal region into a nursery of potential global hegemonies. It might not have happened that way."

That's one factor. But to do it required guns, germs and steel. Indeed, the author makes the point that it was only the systematic and brutal conquest of the Canary islands by Spain that gave Columbus a launching off point that would allow him to utilise the Atlantic currents and reach America.

While I don't agree with all of the author's historical analysis (or his historical approach), I found this a very useful introduction to non-European history. To places that have been forgotten or written out of history. A useful book that should prompt further thought and study.
Posted by Resolute Reader at 7:01 pm

Having listened to the audio book of 1492 I highly recommend it to every one who thinks at all historically. Logic tells us that civilization existed throughout the Americas evidenced by the pervasive and impressive traces of a massively developed society. The utilization of aerial infrared surveys prove undeniably that human manipulation of massive areas of topography benefited these ancient cultures. Do yourself a favour and read this book! Your eyes will be opened in reorienting your view of ancient America. Life changing insights!