Emily Winterburn - The Quiet Revolution of Caroline Herschel: The Lost Heroine of Astronomy 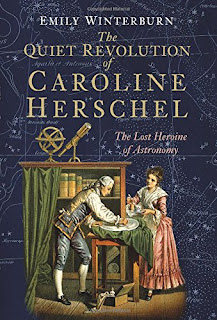 When Caroline Herschel was born in 1750 no one would have imagined that she would have become lauded throughout Europe as one of the most important astronomers of the 18th century. Women simply did not do that sort of thing.

As Emily Winterburn says "nothing about Caroline's early life suggested she would grow up to become a pioneering female astronomer". In fact quite the opposite. She grew up in Hanover in a male dominated household. Her father was an accomplished professional musician and her brothers were expected to follow in his footsteps. Caroline was "taught to cook, clean, spin and make clothes, and was required to look after younger children... Caroline and her older sister Sophia were trained to run a household and to be useful and agreeable to her family".

However when her older brother William found a musical job in Bath, England she joined him there and soon became a close partner with him in his astronomical work. William Herschel was catapulted into fame when he discovered the planet Uranus and received a (relatively low paid) job as a royal astronomer. Caroline is often portrayed as William's able assistant. Yet she was a skilled a diligent observer and scientist, and while he was away on a journey delivering a telescope he had sold, she made the first of her discoveries. Her own notes from 1786 detail it:


1st August: I have calculated 100 nebulae today, and this evening I saw an object which I believe will prove to-morrow to be a comet.
2nd August: Today I calculated 150 nebulae. I fear it will not be clear to-night; it has been raining throughout the whole day, but seems now to clear up a little. 1 o'clock; the object of last night is a Comet. I did not go to rest till I had wrote to Dr Blagden and Mr Aubert to announce the comet.

It was a brilliant discovery. Her paper announcing the comet at the Royal Society was read by her brother because women could not be members. Winterburn explains how Caroline carefully neutralised her announcement and had it backed up by others to ensure that it was taken seriously. It began, "In consequence of the Friendship I know to exist between you and my brother I venture to trouble you in his absence with the following imperfect account of a comet." At the end of the paper, her brother and a (male) friend both add their confirmation of the discovery leaving no room for excuses.

Winterburn explains that Caroline's careful wording was not the result of meekness but a calculated way of making sure she had to be taken seriously. She was using all the social skills she had been taught to make sure that she could not be sidelined. As a result of this, and her other work, Caroline became the "first high-status woman paid for her science [in England], and almost certainly the first to receive royal patronage". It was an amazing achievement and gave her unprecedented financial independence to continue doing what she loved. She continued to make discoveries and fight to ensure that she was recognised for them, including an amazing horse-ride through the night to announce a different comet discovery (though on this occasion she wasn't quite the first).

Caroline Herschel made many further discoveries and did some incredibly important other work. She became famous as the "Lady Astronomer" and while well known for the comets she found, her cataloguing work was much more mundane but perhaps more important. Winterburn explains:


Caroline's real skill, her gift to astronomy, was being able to see the importance of what she was doing, even as she meticulously sifted through observation after observation searching out the occasional error, omission or duplication. It was a job that not even William could bring himself to do. It took a very specific set of very much undervalued skills. 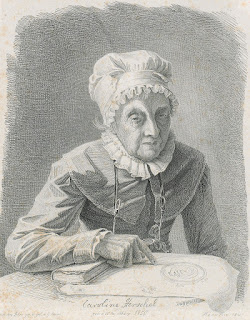 But Caroline's class and gender in 18th century English society meant she also had to play all the other roles demanded of her. Her brother's eventual marriage and the pressures that this put upon Caroline as she became responsible for two households, in a complicated social hierarchy with Williams wife Mary Pitt, form a core part of Winterburn's book as she explores Caroline's life.

But slowly society was changing. Not everyone believed women could not be part of the scientific establishment. Her brother in particular promoted and supported her. Incredibly, because she was his sister and working with his equipment, it would have been perfectly acceptable for him to claim her discoveries as his own; yet he did the opposite. In fact their relationship was much closer to that of a equal partnership. Winterburn writes:


In writing about women in science... we often tend to get bogged down in trying to extract work that was purely theirs from the record. We try to find something tangible that we can connect with their name so they can be returned to history. What we lose when we do that, however, are the ephemeral stories of process, unminuted discussion, teaching as a way of learning and companionship.

There were other male scientists who were keen to work with and promote women scientists. Caroline was included in an updated edition of Jerome Lalande's Astrronomie des Dames and the scientist and mathematician Nevil Maskelyne was a close friend and supporter of Caroline. He was also one of the first scientists to employ women to work as "computers" doing the complicated calculations that astronomy required.

Caroline had her own way of promoting her scientific work, which would not have met approval from all those arguing for greater equality. Winterburn quotes Mary Wollstonecraft, a pioneer of the fight for women's rights, who attacks those who used "pretty feminine phrases" to make it difficult for men to dismiss them. But Caroline was trying to find a way to fight for her position using the weapons she had, and was remarkably successful, and as Winterburn points out, if Wollstonecraft was criticising the strategy it must have been widespread.

By the end of her life Caroline Herschel had been celebrated across Europe, and won awards of scientific bodies across the world. Still unable to become a fellow of the Royal Astronomical Society, she, along with Scottish scientist Mary Somerville, was made an "honorary" fellow in 1835. More importantly she became an important "icon" for generations of later women scientists.

If all Emily Winterburn had done in this book was to tell the amazing biography of Caroline Herschel it would have been a great read. But she puts that story in the context of a society undergoing dramatic changes. Firstly, and most obviously, there is the scientific revolution that is opening up new views of the universe and new areas for study. Secondly society itself was changing dramatically, most obviously with the French Revolution which was raising all sorts of questions of equality, freedom and democracy. For a growing number of women (and some men) this meant a belief that women should not be subordinate to men and a small minority of women were beginning to challenge their position in society. How this played out for individuals like Caroline Herschel was complicated and nuanced. Emily Winterburn's biography explores this brilliantly, and I have no hesitation in recommending this brilliant book.