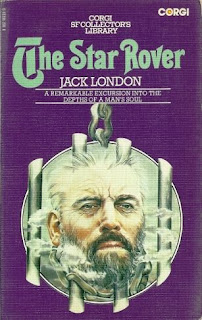 From the author of White Fang and The Call of the Wild, this is an unusual and fascinating science fiction novel that is now quite dated in some of its language, but is an important milestone, itself was probably influenced by works such as H.G. Well's The Time Machine.

First published in 1915 The Star Rover is an account by Darrell Standing, a professor of agriculture who is imprisoned for killing a rival for the affections of the woman he loved. In prison, a convoluted story ends up with Standing being accused of bringing in a quantity of dynamite which he supposedly plans to use for a mass breakout. The dynamite doesn't exist, but in order to torture him into confessing the dynamite's hiding place, Standing is put into isolation and subjected to increasing time in a strait-jacket. There, he learns, via communications with other inmates (made by tapping the plumbing) how to shut his body down, until he enters a trance like state. In this state he is able to travel in time and space, and experience the lives of countless other men from the stone age through medieval France and Korea to the American West.

These unconnected stories are well written historical accounts. In them, Standing experiences unusual lives - a castaway on a deserted island who survives for eight years collecting rainwater in containers carved from rock, a superb duellist, a military commander in Korea who falls from grace and spends a lifetime seeking revenge, and a young boy at the 1857 Mountain Meadow's massacre of a wagon train by the Mormons. I kept expecting these stories to be making a particular point, but they don't really come together. At the end of the novel, facing execution, Standing seems to suggest that the lesson he has learnt is that history is driven by the love of man for woman. He points to his memories of helping to invent the bow and arrow to impress his partner during stone age times and agriculture appears to have been developed for similar reasons.

The book makes it clear that these are real events. Standing learns things, from his historical and other out of body experiences that he could not have known. But all together he simply takes from his knowledge that "there is no death. Life is spirit and spirit cannot die". It's an unsatisfying end to the novel, but one that perhaps fit the early 20th century better than more modern tales - the reader can find his or her own morality tale. It is dated though. In places the language (I'm thinking particularly of the section on Korea) is quite racist by today's standards and the work is overly philosophical, as Standing meditates on life, love and society.

Towards the end, as Standing faces execution, some of London's socialist politics come through a little as he rails against the death penalty. But other than a fascination with foreign places and distant times, there's little here that gives the reader a sense that London's was a important radical activist. While it's not a great novel, it is very unusual and is undoubtedly one that will have inspired later writers. Worth getting hold of if you are interested in the development of the science-fiction genre.
Posted by Resolute Reader at 9:31 pm

Email ThisBlogThis!Share to TwitterShare to FacebookShare to Pinterest
Labels: SF and F, socialist