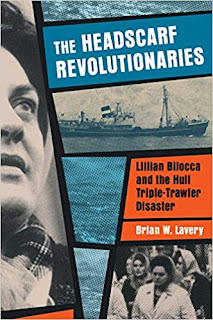 2018 is the 50th anniversary of 1968 and among all the mass movements and great upheavals seen in that year, there were countless other events that year that made their mark on history. One of these is the struggle of the women of Hull to improve the safety of the fishing trawlers that their husbands, fathers and sons crewed in the dangerous northern waters around Iceland. The beginning of 1968 saw three trawlers sink in one of the most powerful storms that fishers had ever seen. 58 men lost their lives and there was only one survivor.

The tragedy hit the close-knit working class community hard and in the aftermath of the sinking one woman, Lillian Bilocca, launched a petition that rapidly became a national movement demanding improved safety equipment aboard the ships. Mrs Bilocca's son was one a trawler at the time (though not one that sank) and she knew, as did many other women, that it could easily have been her son. One key demand, and it seems incredible today that it wasn't a legal requirement, was to have a qualified radio operator on board each ship. Another was against the use of "Christmas Cracker" crews - inexperienced crews sent out over the winter when more experienced crew members wanted to remain at home with their families.

Author Brian W. Lavery has a long association with Hull, and describes this book as being the result of a promise that he would "set the record straight" about Mrs Bilocca. The book begins with an account of life for fishers on the trawlers. This was an incredibly hard job;  the work required huge physical effort, long hours and often took place in appalling conditions. The ships themselves were frequently dangerous with safety equipment damaged or missing. Lavery points out that at the time ships from European fleets had better equipment and sailed with a command ship that helped look out for the smaller vessels as well as providing support. Crew members were handsomely rewarded for their dangerous work, though the real profits were made by the owners.

Venturing out in the depths of winter into appalling weather was not done out of greed on the part of the crews, but by the ship-owners knowledge that they could make a fortune from a successful return. The short-cuts, dangerous voyages and lack of equipment helped improve the profit margins, but it was the workers on the boats who paid the price. If one anecdote demonstrates this, it is that in the aftermath of the disaster as fishers who had been rescued from a Grimsby trawler were recovering in Iceland, listening to the news of the women's campaign on the radio, their skipper interrupted them.


'You are not going to believe this, lads... but they are only telling us to go back out fishing.' The men were agog but even further astonished by the skippers' next words. 'If I were you lads I wouldn't go. I'll have to get back to them with an answer. Shall I just tell them you are refusing to go? After all, we can hardly blame you.'

Not surprisingly the men said no, the first time a "company command" was refused. Nor is it a surprise that Mrs Bilocca's petition was instantly supported by thousands of locals. Together with several other outspoken women they proceeded to launch a mass campaign for safety. Brushed off by the ship-owners, and in the midst of a media storm the women took their campaign to parliament and, together with the trade union movement, were able to win promises of significant improvements.

Mrs Bilocca found herself at the centre of a national media storm. The tragedy was just the sort of thing the national presses loved and there was a fine angle involving the grieving families and the women's campaign. Unfortunately the media was then, as now, a fickle friend, and was quite capable of turning on those it had held up a few days previously. Mrs Bilocca's working class accent and plain language was turned on her, and some sections of the media erroneously suggested that she had called for a sex strike until their men joined the campaign. Such slurs undermined the campaign and seriously upset Mrs Bilocca, as did the vicious letters sent to her accusing her of interfering in men's work and hitting the community in the pockets. Her campaign was a challenge not just to the bosses, but to many in the community itself.

Lillian Bilocca's campaign had forced the government to introduce a moratorium on fishing in the dangerous area and grant an official inquest into the disasters. Ship owners were forced to make major improvements to safety and politicians made to act. These gains were won extraordinarily quickly - and there is no doubt that this was the result of Mrs Bilocca's personal bravery and commitment. What is also clear is that while a minority of the community disliked her interference, most were of the opinion that "something had to be done" and despite the vicious threats from a small number, Mrs Bilocca's actions led to victory.

Despite the personal tragedies, and the sadness that clearly dogged Lillian Bilocca after the events (she lost her job as a result of her campaigning and never worked in the fishing industry again, having to take cleaning jobs to make ends met) this is a remarkable book that demonstrates that ordinary people can win. Lavery suggests that Lilian Bilocca and her comrades' "Headscarf Revolution" might have been a "naive" one. There is no doubt that she and the others underestimated the power of the media to make and break heroes. But struggles that explode onto the historical stage are usually led by ordinary people who have never played such a role before. In many ways it is precisely their naivety that means they are free of the chains that hold back many seasoned activists.

It is worth highlighting that this book has relevance to today's world. Lavery highlights the limitations of the official union movement in both building among fishers and winning change. The workers might have been considered impossible to organise - much like the fast food workers or other "precarious" workers of the 21st century. Fishers were home for a few days before disappearing for weeks. Yet Lillian Bilocca's campaign proved that the community and the workers could win change. Fishers were also limited by the Merchant Shipping Acts that prevented strikes (though it didn't stop the refusal mentioned above!) Secondly I was struck by how radical movements can explode out of nowhere and rapidly win real change. As one of the union officials said, it is a shame that such a tragedy had to happen before changes were made. But this book is a fitting tribute to Lillian Bilocca and her comrades who, when the time came, stood up and refused to back down.

I'd like to take this opportunity to also highlight a new album about Hull's Fishing Community by Joe Solo. Due out in January 2019 it's title track is about the disaster and is very moving.