Asad Haider - Mistaken Identity: Race and Class in the Age of Trump 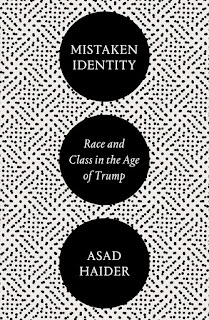 Donald Trump's election made bigotry mainstream. Racists, homophobes and misogynists have been empowered by Trump's right-wing rhetoric. How the left understands and responds to this will be crucial in terms of building a united movement that can beat back the right and win real change for ordinary people, as well as protect and defend the rights of those that are under attack from the bigots. As Asad Haider's important new book shows, these battles are not confined to America and the debates are crucial for left-wingers around the globe.

But Haider begins by showing how, perhaps surprisingly, the main way that progressives have attempted to understand oppression - identity politics - has undermined their ability to build the united movements we need. Haider argues that identity politics has moved away from its original usage, as an attempt to make sure that marginalised voices and experiences were not lost to wider movements, and has become an end in itself, helping to undermine movements. He writes:


In its campus activist usage, however, 'intersectionality' appears to move in the opposite direction, retreating from the coalition-building practises of the CRC and instead generalising the condition of the plaintiff: equating political practice with the demand of restitution for an injury, inviting the construction of baroque and unnavigable intersections consisting of the litany of different identities to which a given person might belong. Those whose identity is inscribed with the most intersecting lines can claim the status of most injured, and are therefore awarded, in the juridical framework to which politics is now reduced, both discursive and institutional protection. This protected status implies neither the political subjectivity that can come from organising autonomously, nor the solidarity that is required for coalitions that can enrage in successful political action.

Here, the CRC referred to by Haider is the Combahee River Collective, a group of "black lesbian militants" in Boston, SA who in 1977 issued a statement responding to the racism and sexism in the movement which they said had "undermined" revolutionary socialism. They believed that raising questions of identity and intersectionaility would allow socialists to build stronger movements and coalitions that could be more effective.

Sadly, argues Haider, the opposite has been the case and he gives a number of examples of the ways that contemporary movements have instead become undermined by such politics. Haider points out, for instance, that the Black Lives Matter movement frequently involved groups and individuals who argued that only "black-led organisations" could organise around these issues, but the problem is that there are frequently "deep political divergences among those organisations-some of which represented the elite interests of a black bourgeoisie and explicitly sought to suppress grassroots militancy".

Against this, Haider tries to show how movements can effectively link class struggle and put anti-racism at their heart (Haider focuses on the question of race in this book, though he does not ignore other questions of oppression) including the US Communist Party in the 1930s. He also attempts to understand the retreat of left-wing politics in the context of the neoliberalism introduced by Thatcher and Reagen and followed up by many other politicians. His analysis of events in the UK draws heavily on the political theorist Stuart Hall, but I found this the least convincing part of his argument. For instance, Haider argues (along Hall's lines) that the Miners' Strike (the most damaging defeat for the British working class in the 20th century) was unwinnable from the start. But what he misses is that the Miner's almost did win on several occasions, because he neglects the role of the trade union bureaucracy and the Labour Party. As a result, I think he almost sees the rise of neoliberalism and identity politics separated from its original class-based politics, as inevitable. That said, Haider is correct to see where it ends up, "as a result, the progressive languages of the new social movements, uprooted from their grassroots base, would be appropriated by a new ruling-class strategy."

Haider finishes his wide-ranging, short book, with an appeal for a return to a new politics of universal liberation. He takes inspiration from movements today that fight for solidarity for other groups - such as the "refugees welcome" movement in the US against Trump's Muslim bans. Despite it's short length there is a lot here, from the novels of Philip Roth to a detailed examination of the origins of racism in the Atlantic slave trade. At time I felt a little bombarded by information, but I think that this is a book that deserves a wide-readership for those of us engaged in trying to rebuild radical left politics in the 21st century.

Fryer - Staying Power: The History of Black People in Britain
Richardson (ed) - Say it Loud! Marxism and the Fight Against RacismDresser - Black and White on the Buses: The 1963 Colour Bar Dispute in Bristol
Slorach - A Very Capitalism Condition
Orr - Marxism and Women's Liberation
Posted by Resolute Reader at 5:26 pm